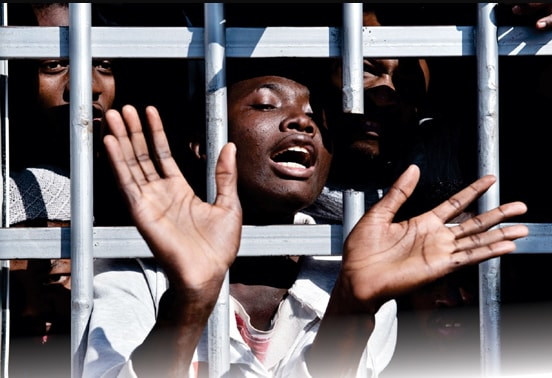 The mothers of 3 female victims of modern slavery in Libya have cried out as police paraded the man who facilitated their trip to the North African country.

The troubled mothers of the 3 girls from Ikere Ekiti made the call today at the Ekiti State Police Command Headquarter in Ado Ekiti while trafficking suspect, Dada Ogundare was being paraded.

Dada Ogundare and Omoseeke Komolafe (a Prophetess) were alleged to have collected money from the parents of the girls before handling them over to some human traffickers who took them to Libya.

The victims who left Ado Ekiti on the 25th of November 2017 to seek employment in Dubai ended up in Libya where two of them were sold into slavery.

Their traffickers (Nigerians) allegedly called their parents and demanded for N1.2million for each of them and when they couldn’t provide the ransom, they sold them as slaves.

Sadly, one of the girls who is 4 months pregnant as at the time she left Nigeria on November 25 is suffering now.

The sorrowful parents said their daughters were trafficked to Libya on the pretext that their traffickers were taking them to work in Dubai.