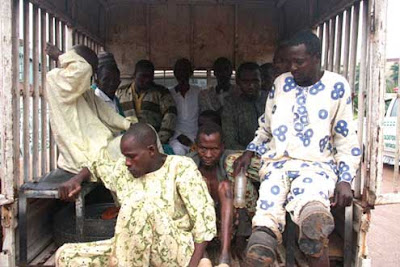 In a new dimension in the war against begging, the Special Offences Court in Alausa area of Ikeja, Lagos, Southwest Nigeria has sent 30 beggars to Kirikiri and Badagry Prisons for soliciting for alms and other offences.

The Lagos State Government had charged them to court for constituting nuisance in public by begging for alms. The government says it is no longer going to be business as usual as it has vowed to prosecute erring beggars on the streets of Lagos. The Attorney General of Lagos State was the prosecutor in the case.

Some of the count charges against the beggars included conducting themselves as disorderly persons without visible means of livelihood and thus committed an offence under the criminal law of Lagos State.

They were also charged with conducting themselves in a manner likely to cause breach of peace and for receiving, demanding and collecting dues or unauthorised levy from persons and thus committed offence punishable under the law on illegal collection of dues in public places.

The beggars, 30 in number pleaded guilty to the offences and were consequently sent to Kirikiri and Badagry Prisons for one month pending when the final judgment would be delivered by the judge. Nine of them, as a result of their disabilities were rejected by prison officials and were then taken to the Lagos State Rehabilitation Home, Majidun, Ikorodu on the outskirts of Lagos.

Some of the beggars prosecuted, were said to have attacked government officials during a rampage at the Lagos State Rehabilitation Home, Majidun, the place where they were being rehabilitated. Thirteen other beggars were also arraigned on Friday by the government at the same Special Offences Court.

Special Adviser to the Governor of Lagos State on Youth and Social Development, Dr. Dolapo Badru said government decided to begin prosecution of beggars because it had exhausted its patience with the beggars. “We still rehabilitate some of them, but most of them don’t want to be rehabilitated and they don’t want to work. They feel more comfortable preying on people with superstitious beliefs.

Lots of beggars now prey on these people’s superstitious beliefs to get money from them. Many of them pretend to be blind, crippled, among others. They make more money than many people gainfully employed,” he explained.

Badru added that the cosmopolitan nature of Lagos had made it possible for barons to ship beggars to the metropolis to beg for alms, making lots of money, stressing that many of them felt so comfortable begging for alms on roads.

“We have tried a lot to rehabilitate them by making some of them to learn trade, but they don’t want to work. Some of them don’t want to use the skill we taught them to work, but they prefer to be on the road because they make more money at a go than using their skills. What we do now is that when we have overcrowding at the rehabilitation homes, we re-unite some of them with their families.

However, some people rescued from the street more than once are prosecuted. We have sent 30 of them to Kirikiri and Badagry Prisons,” he stated. Some of the beggars prosecuted are Fatima Jubril, Sanusi Muhammed, Lado Amadu, Badayani Garuba, Denyaya Isali, Beto Manu, Garuba Ibrahim, Aruna Yau, Dauda Amadu and Magada Salisu.