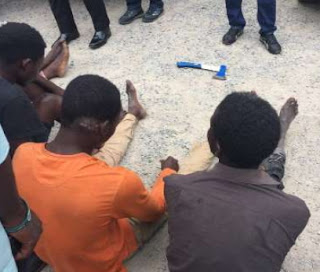 Four suspected Badoo ritual killer gang members have been arrested for their alleged involvement in the recent killing of a RCCG Pastor, Victor Kanayo and a woman with her children in Ikorodu, Lagos.

Abdulrazaq Yahyaha and Abubakar Tenimu were apprehended at Ibeshe in connection with other killings.

According to the state Commissioner of Police, Imohimi Edgal, two mobile phones belonging to the deceased persons were recovered from the suspects.

Edgal said Anifowose, Igwe and some other persons at large invaded the pastor’s home the day he was killed, adding that they entered his house by cutting the window.

The police commissioner said police discovered a grinding stone suspected to have been used by the pastor’s killers.