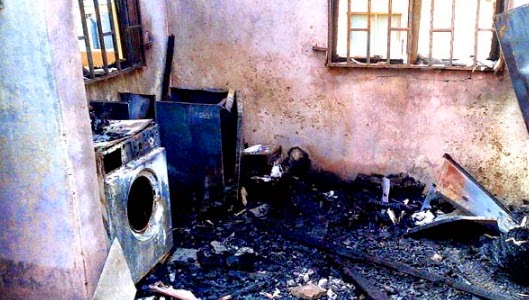 The joy of Ozoemena Nwoye’s fam­ily in Omuko Village, Awka South Local Government Area, Anam­bra State, has been shattered by the tragic death of their four children in a fire outbreak. The incident occurred in their residential home.

The victims, Ikechukwu Nwoye, 9, Chinonso Nwoye, 7, Chisom Nwoye, 5, and Chioma Nwoye were fatally burnt in an inferno that erupted while they were asleep in their apartment.

Although the immediate cause of the fire is still unknown, neighbours told Daily Sun that the fire might have been caused by a candle. To worsen the situation, parents of the victims were not at home when the incident occurred.

The father of the victims, Nwoye, who was devastated by the tragedy, said efforts made by sympathetic neighbours to rescue his four children failed. He said the eldest son, Ikechukwu, died on the spot, while his three siblings clung precariously to life before giving up within intervals on Sunday morning at the Nnamdi Azikiwe University Teaching Hospital, Nnewi.

The agony of the couple was indescribable when the reporter visited their apartment. Debris of burnt furniture and charred remains of family belongings littered the area. Mourners also thronged the area with long faces, expressing their condolences to the grieving couple.

Nwoye, a tenant in the burnt building and a native of Ezeagu Village, Ebonyi State broke down in tears as he spoke with the reporter. “I am so devastated by the fire incident. My family has been suffering from one problem to another. We don’t really have any hope right now.”

He said he and his family had lost virtually everything they toiled for over the years, noting that the tragic death of his children in one swoop has made his life miserable. He pleaded with the Anambra State government to assist his family in their present affliction.

His wife, Mrs. Ginika Nwoye, who couldn’t control her tears before the sympathisers, said she visited her husband’s brother who had a surgery at Amaku General Hospital, Awka when the inferno that consumed her kids started.

Her words: “I was at the hospital till 10pm when my neighbours called me on phone and told me that my house was burning and my children were still inside. I rushed back to my house but on getting close, we had lost everything. My first son, Ikechukwu, died immediately and other three were badly burnt and were close to death before we rushed them to hospital where they later died.”

An eyewitness, Mrs. Ebere Nwokike, recounted how she came out of her room around 9pm to use the urinary and on getting back to her room, she discovered that the children had left the candle burning and slept off. According to her, she called Ikechukwu to put off the candle, which he promptly did. But she was surprised when she discovered smoke coming out of the building. She suspected that the lad, overwhelmed by sleep, might have lighted the candle again when she had gone back to her room.

“I saw flames everywhere and rushed outside with my child. Before people could notice what was happening in the building, it was already too late. People only noticed the incident because of the heavy smoke that was emitting from the windows. Probably, the children cried for help but nobody heard them,” she said.

Nwokike said neighbours forced the door to the apartment open, but noted that by then, the children were already burnt beyond recognition. She said the bodies of the children were seen together at one corner of the house where they had apparently run to for safety, hoping to escape from the inferno.