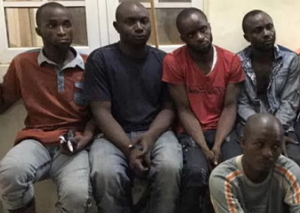 Kebbi Police command has arrested 4 suspected kidnappers in Koko-Basse LGA  of the state and retrieved N800,000 ransom they collected from their victims.

The State Police spokesperson, DSP Mustapha Suleiman, told newsmen in Birnin Kebbi on Sunday that they were apprehended by police patrol team along Koko-Basse- Fakai Road after the gang completed their operations.

“The suspects are Mohammadu Mani, Muhammadu Muhammad, Umar Mohammadu and Abdulkarim Isiya who were caught while heading to Zuru Local Government Area.

“All the ransom they had collected from their victims were retrieved and they will be charged to court for proper prosecution,” he said.

NAN learnt that the suspects had kidnapped one leader of the Fulani community in Koko-Basse, Alhaji Aliyu Dikko, and collected N300, 000 out of N3 million ransom demanded from his family before he was released.

The suspects also collected N500, 000 from a victim, whose identity could not be ascertained before they were arrested by the police. (NAN)

Continue Reading
You may also like...
Related Topics:kebbi, kidnappers