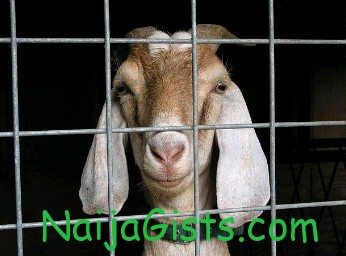 Here comes one of the funniest news headlines of 2013. According to sun news report, 5 stubborn goats were arrested on Tuesday in Osogbo , Osun State Nigeria for allegedly violating environmental protection law.

The goats have been detained pending charges.

Here is a detail report from sun news:

No fewer than five goats were yesterday arrested at Dele-Yesa area in Osogbo, the Osun State capital by officials of the state Waste Management Agency (OWMA) for allegedly violating environmental laws. The state Coordinator of the agency, Mr. Henry Ogunbanwo said the goats would be charged to court by the agency and would be prosecuted in accordance with the laws guiding environmental protection in the state.

He said the state government had issued notice of warning to all residents of the state capital on the need to monitor their domestic animals to avoid public disturbance by the animals, which, he said, was against the environmental laws. Ogunbanwo disclosed that the five goats arrested were detained at the office of the agency in Osogbo from where they would be taken to court for prosecution.

He said the goats ran fowl of the laws guiding environmental protection by roaming around the residential area of Osogbo instead of being caged by their owners. He declared that the present administration in the state had zero tolerance for dirtiness and environmental hazard; hence the need for the enshrinement of the environmental laws, adding that the government would not take it lightly with violators of the laws According to him, officials of the agency would from now move to every nook and cranny of the state to arrest animals violating the state environmental laws, stressing that owners of such animals would also be dealt with in accordance with the provisions of the laws.

He advised those rearing domestic animals to keep them in a cage to avoid arrest, insisting that his agency would not allow any animal to roam about on the streets of any town or village in the state. He urged those looking for their goats in Osogbo and its environs to check at the state office of OWMA in Osogbo.

So these people no get better jobs than to be arresting innocent goats.