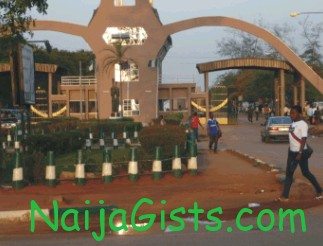 A senior lecturer of the University of Benin (UNIBEN), has landed in trouble for extorting N100, 000 from a female student . The lecturer (name withheld), who is in the Faculty of Law was arrested by the university’s security personnel and handed over to the police after he allegedly collected the marked money from the student to change her course of study from English Language to Law.

It was learnt that the arrest of the lecturer had led to the busting of a syndicate that specialized in extorting money from students in the institution. Informed sources at the university revealed that the suspect, said to have strong links in the committee constituted by management to coordinate students’ inter-faculty movement every academic session, used his vantage position to compel the female student to pay N150,000 to approve her request for a switch from the Faculty of Arts to the Law faculty.

It was gathered that the student, who could not immediately raise the money, following pressure mounted on her by the lecturer, reported to another lecturer, who decried the planned extortion and encouraged her to formally lodge a complaint with the higher authority in the institution. Following the advice, the student played along and called the lecturer that she could only raise N100, 000, which she was promptly directed to pay into a certain account given her by the lecturer.

Luck, however, ran against the lecturer when he called the girl’s mobile phone, asking her to discontinue the bank arrangement and instead, to bring the money to him in his office, just when she was going to pay the money into the bank account earlier given to her. Sources told Daily Sun that no sooner that the female student delivered the marked money to the lecturer than the alerted personnel from the security unit swooped on the unsuspecting lecturer and handed him over to the police.

A search in the lecturer’s office by the university security personnel was said to have led to the discovery of a list of 18 students, including the female student who paid the N100, 000.00. When contacted, the Public Relations Officer of the university, Mr Harrison Osarenren, confirmed the report, saying “with the arrest, we will try and rid the system of bad eggs.”