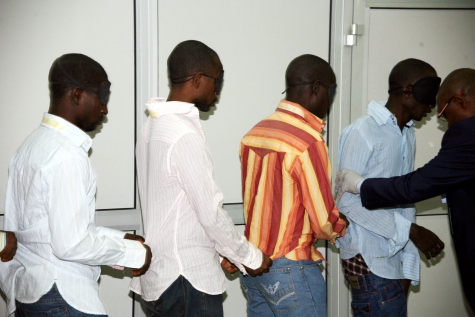 5 criminals have been arrested by Edo Police Command while planning to assassinate one Etionsa Ighodalo and many others in Ovia North-East LGA of Edo State over politics and who becomes Chairman of Iyowa Community.

While briefing journalists in Benin yesterday, Zone 5 ASP, Emeka Iheneanacho said that the suspects identified as Osahon Iserhienrhien Monday Idele, Uhunoma Idele, Iyobo Iyamu, Odion Omwamghe and Augustine Igbinovia were hired to assassinate one Etionsa Ighodalo and a few others on the 4th of July 2015.

The Zonal operatives got wind of the planned assassination and arrested Monday Idele and Uhunoma Idele, whose statements helped in the arrest of the principal suspect, Osahon Iserhienrhien, Iyobor Iyamu, Odion Omwanghe and Augustine Igbininovia on the 5th July 2015 at the Native Doctor shrine where they seek for voodoo and spiritual protection,” Iheneanacho said, adding that the remote cause of the sinister plan was power tussle between Mr. Etionsa Ighodalo and the principal suspect, Osahon Iserhienrhien.

The police spokesman said item recovered at the Native Doctor’s Shrine was a list containing names of Etionsa Ighodalo and nine others allegedly targeted for murder by the suspects.

Also paraded by the Zone 5 Command was one Stephen Enakhare Oshioma, suspected to be a notorious fraudster who specializes in forging and faking corporate institutions’ documents such as University Degree Certificates, School Certificates, drivers licenses, bank statement of accounts, among others.
The suspect was arrested at his No. 6, Paul Omorodion Street, BDPA Ugbowo, following a tip-off.

Following his arrest, his house was searched which led to the recovery of several forged Certificates of Ambrose Alli University, Auchi Polytechnic, College of Education, Ekiadolor and sets of computers, rubber stamps of various tertiary, banking and corporate institutions within Edo and Oyo states.