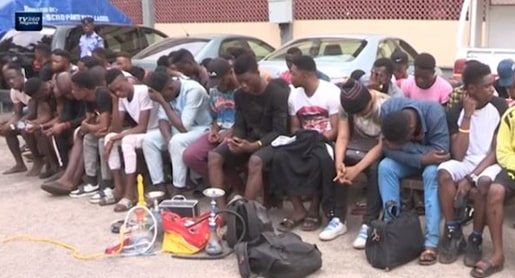 A human rights group,  The Initiative for Equal Rights has called for the dismissal of criminal case against 57 men arrested by the Lagos State Police Command at a birthday party in Egbeda area of Lagos, a year ago with lack of evidence.

The suspects were arrested for allegedly being initiated into a homosexual club at a hotel on 26th of August, 2018 but no single charge has been brought against them, and no evidence has been brought forward despite five court appearances.

The civil right group called for the dismissal of the case at a press conference held for the young men to tell their side of the story and what they have been going through after the Nigerian Police paraded them in front of the media.

The Group Executive Director, Miss Xeenarh Mohammed, while addressing journalists said for one year, the 57 men had been branded as criminals, incurring travel, and legal costs, while the police, with support from the magistrate, had given excuses why they had not been charged or acquitted.

In her words, “We got in touch with them and they don’t have legal representatives, and I think that’s also the part of the problems that happen in Nigeria. If you are from a lower class where you don’t have money, where you cannot buy justice, you are left to rot in jail without help from anyone.

“Some of the boys are here so they can talk about what they have been through since they were arrested and there are many people in Police stations, in Kirikiri who are suffering worse cases than them because they have nobody to stand up for them.”

Mohammed called for the case to be dismissed for lack of evidence, and asked the Nigerian Police to tender an apology to the boys for the brutality and maltreatment they received while in detainment.

“We hope you are here today to help us call for justice that these boys should be acquitted, they should get the apology that the constitution has guaranteed them and also their freedom,” she said.

The lawyer and lead counsel to the suspects, Oludare Falana, sid the police had failed to file any case against the suspects up till date.

According to him, the suspects were detained under Section 264 of the Administration of Criminal Justice Laws of Lagos State pending the outcome of the police’s investigation, adding that the magistrate granted the boys bail and that they were left off the hook at least, temporary.

“It’s been one year exactly, and I can tell you that as at the last time we were in court, not a single charge has been filed against them. I was in court the last adjournment and I tried to move the magistrate to strike out the case because there is no case before the court because there is no charge but in her wisdom, she said she is going to adjourn again.”

Citing the Section 40 of the 1999 Constitution, Falana said the suspects had the right to assemble and freedom of association.

“If the constitution has guaranteed their freedom of association, freedom to assemble together, that fundamentally guaranteed freedom cannot be taken away by anybody. Anybody can gather, that’s what the constitution says and from the charge that I saw, it was not signed the Police and they said they were engaged in cultism and later they said it was unlawful sexual relationship.

“For now, every other thing as it stands today is in the realm of speculation. These boys have been shown to the whole world as homosexuals, as criminals and all that and at the end of the day, if a state cannot prefer a charge against them in one year, it tells a lot about what has gone wrong in their investigation.

“Secondly, how are you going to make up for these stigmatization? Are you going to take them back on air and say you are sorry, these boys are not who we thought they were and therefore we apologize? Are you going to put it in the newspapers? How do you ameliorate their pains in terms of recreating the wrong impressions you have given the whole world?

“Till date, the Police have not been able to come up with anything and that tells us the extent of injustice in our system. I am aware that this will not happen in any clime except Nigeria. And I do not know why our government is not taking things like these seriously,” he stated.

Falana lamented that the police were quick to arraign people and do media trial but that when it comes to the issue of substantiating the allegation against them, “suddenly they just go numb, and then they will be foot-dragging and eventually the case will fizzle out.”

“But what happen to these boys? They are Nigerians, this story had gone viral even international. These boys are lucky they have a voice, what about others who don’t have anyone to speak for them? They die in pain?” He asked.

Some of the 57 men arrested, who were present narrated their ordeals.