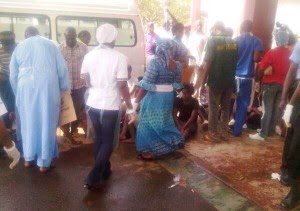 A recruitment drive organized by the immigration department at the nation’s capital today has claimed the lives of seven job seekers.

According to report from Abuja, at 7 people got killed and several injured after over 1000 job seekers stampeded at the national stadium in Abuja today.

Survivors said thousands had gathered to apply for jobs with the immigration department in the Abuja stadium.

One witness said the stampede broke out as applicants surged towards a central stage. They said only one entrance to the 60,000-capacity stadium was open. It wasn’t clear how many people were inside at the time of the crush.

“The immigration service was having a recruitment exercise at the stadium … there was a stampede and they brought the victims to the national hospital,” said hospital spokesman Tayo Haastrup.

According to AFP, no official causality figure was given but 7 dead bodies were seen at the scene of the stampede.

Many of the injured victims couldn’t be admitted due to lack of capacity.

“Those with stable injuries “will be sent to other hospitals so that we can deal with the numerous injured that continue to arrive,” said Haastrup.

Please Jonathan must do something to help unemployed graduates in this country ooo… This story is heart breaking.