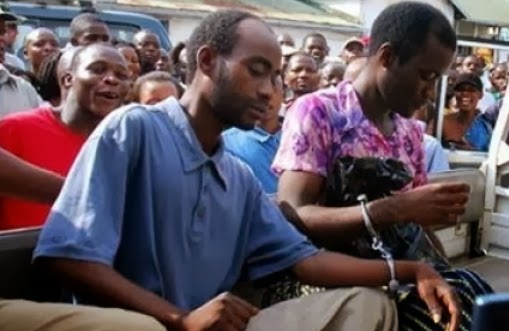 7 gay suspects standing trial at the Upper Court 4 in Anguwa Jaki in Bauchi were pelted with stones and almost lynched by an angry mob.

The incident, which caused commotion in the area, happened on Wednesday around 1.44pm.

It took the intervention of security personnel to rescue the seven endangered suspects. They fired gunshots into the air and used canisters to disperse the mob.

The angry mob then hurled stones at the van carrying them as it sped dangerously back to prison. A few people sustained injuries in the fracas.

They are facing charges of allegedly engaging in gay activities in Bauchi State, an action that contravenes the Islamic laws which the state is operating.

The atmosphere around the court was tense as the suspects came out of the court to mount the Nigerian Prison Service Hilux van which conveyed them to court.

No sooner had they filed to mount the van than the mob started reacting by reigning abuses and pelting them with stones.

The heavily armed prison wardens had to fire gunshots to disperse the crowd.

There was pandemonium as the Sharia Judge, Yakubu Aliyu, journalists and lawyers scampered for safety.

Earlier, inside the rowdy court, counsel to the Shariah commission, Danlami Ayuba, told the court that one of the suspects, Marafa, was the principal of Government Secondary School Mainamaji.

When the case was slated for hearing of witnesses, counsel to the suspects, Abdul Musa, pleaded he was not ready and sought bail for his clients.

The presiding judge, El-Yaqub Aliyu, refused to grant the bail and adjourned till Monday, January 27, 2013.