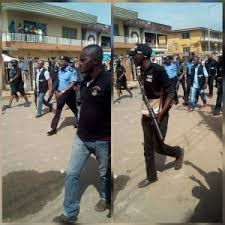 A 73-year-old man identified Emmanuel Ajasa, was today brought before an Ebute Meta Magistrates’ Court in Lagos for the murder of his nephew, whom he allegedly stabbed to death.

The Magistrate, Mrs. O.O. A. Fowowe-Erusiafe, ruled that Ajasa will remain behind bars pending receipt of legal advice from the office of the Lagos State Director of Public Prosecutions (DPP).

The plea of the accused was not taken.

Earlier, the prosecutor, Sgt. Courage Ekhueorohan, said the accused committed the offence on February 11 at 10.40 p.m. at No. 9, Kalejaiye Street in Ikorodu area of Lagos.

He said the septuagenarian, out of annoyance, used a knife to stab the deceased, Adeniyi Oyebajo, 50, who was trying to settle a dispute between his mother and the accused.

The offence violates Section 222 of the Criminal Law of Lagos State, 2015 and punishable under same.

The case has been adjourned till March 19.