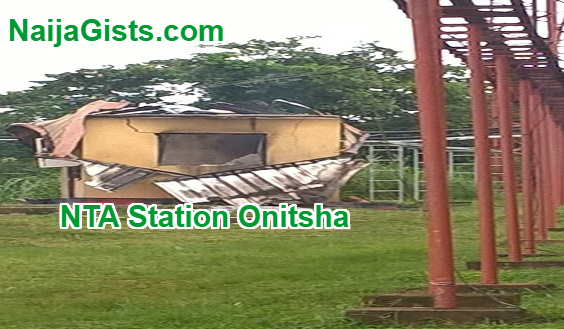 Suspected militants working against the FG on Wednesday attacked the Nigeria Television Authority (NTA) office in Onitsha, Anambra, torching some equipments and Star Times section in the premises.

Acting Manager of the station, Mr Chris Nwigwe, disclosed in Onisha that the incident occurred at about 1.40 a.m.

“Some armed men tried to attack the staff on duty but only succeeded in burning down the Star Times building,” he said, adding that no life was lost in the attack.

An eyewitness said that an Improvised Explosive Device (IED) was planted at the security post of the station, while tyres were set around the premises to set the station ablaze.

“There was a gun duel between the armed men and policemen who are manning the office.
“They managed to burn down the Star Times office while the fire was later put out with the help of people around.

“This type of incident has never happened,” the source said.

The military today arrested 8 suspects in connection with the attack.