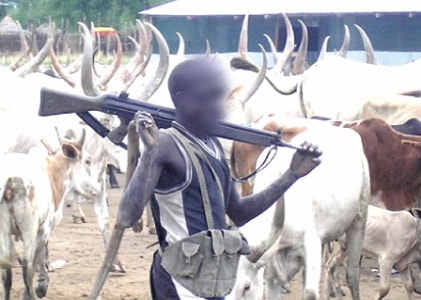 Some suspected herders have allegedly massacred an eight-month pregnant woman in Orin-Ekiti in Ido/Osi Local Government Area of Ekiti State.

The deceased was said to have hailed from Benue State and was of TiV tribe.

According to Daily Sun, the woman was dispatched to her early grave, late on Wednesday night, by men believed to be herders.

Another source, however, who spoke to Daily Sun on condition of anonymity , said the deceased could have been a victim of armed robbery attack.

A gory picture of the woman displayed a part of her face cut open by several machete cuts as blood gushed out of the affected part.

Some residents of the community said the Tiv pregnant woman was hacked to death by those referred to by the locals as “Bororo herdsmen” at the town’s Farm Settlement.

The killing took place barely 48 hours to a referendum in the town on the vacant stool of the Olorin. The indigenes are expected to vote “YES” or “NO” on the number of ruling houses in the community.

One of the elders of the town, the Onikare of Orin-Ekiti, High Chief Bamidele Fasuyi, said the referendum would go ahead as planned on Saturday despite the killing incident.

An indigene of the town, a former Chairman of Ido/Osi Local Government Area of the state, Prince Sanmi Olubummo, who confirmed the incident in a telephone chat, disclosed that another victim of the attack was receiving treatment at a hospital.

Olubummo said policemen from Ido-Ekiti Divisional Headquarters visited the scene of the crime and said situation was calm.

“The incident happened inside the Orin Farm Settlement. Nobody knows what led to the crisis in the early hours of Thursday but our people said the Bororo herdsmen killed the pregnant woman.”

But the Regent and the Olorin-in-Council have said it would hold a referendum, on Saturday, to resolve controversies surrounding the royal stool.

There are three Ruling Houses in the town: Famokiti, Olubummo and Idimehinsuwon. However, there is a controversy over the acceptance of Idimehinsuwon as one of the ruling houses.

A statement signed on behalf of the Olorin-in-Council, by the Onikare, High Chief Fasuyi, urged the ruling houses to make their representatives available to witness the referendum.

“The referendum is aimed at the community’s populace who are the stakeholders on the issue of who rules them to publicly express their candid opinions on the matter of who is entitled to rule over them.

“This referendum is at the interest of the whole Orin-Ekiti community,” the statement said.