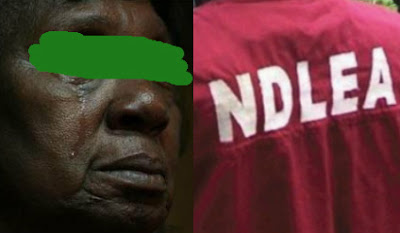 The judge, however, ordered that the convict be remanded at the Lagos State Old People’s Home, pending the time a member of her family, willing to take proper care of her, applied to the court for her custody.

The convict, a resident of Oto-Awori, in Ijanikin, Lagos, had on Nov. 7, pleaded guilty to a one count charge of trafficking 10.3kg of Cannabis, also known as hemp.

She was arraigned by the National Drug Law Enforcement Agency ( NDLEA ).

After her plea, the prosecutor, Mr Aliyu Abubakar, had urged the court to adjourn the matter, for a review of the fact of the case.

At the resumed hearing of the case, the prosecutor tendered some exhibits which included the convict’s statements, a drug test analysis and the bulk of the substance seized from her, which were admitted as exhibits by the court.

After admitting the exhibits, the court pronounced the 87 years old woman, convicted as charged.

However, the convict’s lawyer, Mr Prosper Ojakovo, in his plea for mercy of the convict , urged the court to be lenient in sentencing her.

He told the court that she was a first time offender, who had nobody to take care of her.

He pleaded with the court to temper justice with mercy, and consider her age in sentencing.

In her judgment, Shagari stated that sending her to prison would not be of any benefit, especially considering her age.

The judge, consequently ordered that the convict be remanded at the Lagos State Old People’s Home, Yaba.

In another matter, Shagari sentenced a 56-year-old woman, Anya Nneoma, to 12 months imprisonment, for unlawfully dealing in 5.5 kg of hemp.

Anya, a resident of Badagry, had also pleaded guilty on a charge of illegal dealing in hemp.

The judge said the convict should be sent to the female section of the kirikiri Prisons, Lagos.