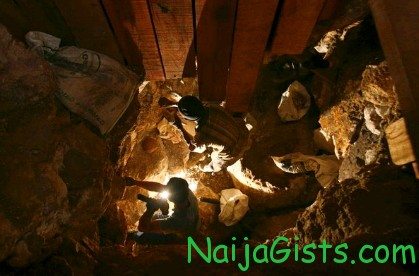 No fewer than nine people died after a mining pit caved in on alleged illegal miners in Dogon Daji Village of Ruwan Dorawa, Maru Local Government Area of Zamfara State, as two miners dug gold worth N2.3 million two days before the incident. The incident happened at about 5:00a.m yesterday when the miners were digging up gold at one of the mining sites, few metres from Dogon Daji Village.

An eyewitness named Shafi’u Abdullahi told Daily Sun that they were about to observe their morning prayer when some people rushed to the mosque shouting for help. “We rushed to the mining site and found out that the under ground tunnel caved in and we understand that 10 people were inside and we believed they are buried alive.”

We gathered that it took the rescuers more than nine hours before they could dig the dead miners out of the collapsed pit. Eyewitness further explained that after they rushed to the site, many of them (rescuer) started using hoes, shovels and all other available objects to rescue those trapped, but they were able to get only one person alive and he was rushed to the hospital in Maru.

“When we brought them out around 2:00p.m, nine of them were already dead except one Mallam Hussaini Maikifi who was rescued and rushed to hospital.” Daily Sun learnt from a close source, Lawali Abubakar that before the collapse of the mining pit, there was sign of possible collapse, which the miners took with levity. When Daily Sun visited the scene of the incident, it was gathered that the site was deserted. Sources further disclosed that two miners made N2.3 million in one of the mining pits in the area a day before the tragedy struck and that it had become a means of earning a livelihood to the teeming jobless villagers.

“We won’t stop mining despite the dangers unless government provides alternative jobs because we are eking out a living from the business,” another eyewitness, Isah Ibrahim said. Meanwhile, the Police Public Relations Officer (PPRO) of the state police command, DSP Hassan Usman Talba confirmed the incident, saying, the law banning all forms of illegal mining was still in force and that anybody caught would face the full wrath of the law.

“The only problem we are facing on the issue of illegal mining is that we cannot locate these illegal mining sites with ease because, they are mostly situated in the forests and let me tell you when I was a DPO in Anka Local Government Area, I arrested some of them,” he added. (Source:SunNews)