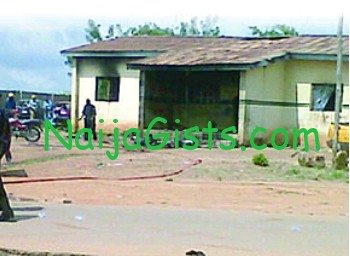 Confusion pervaded the air at Kuola area of Apata yesterday following the violent clash, which erupted between policemen and motorcycle operators popularly called Okada in the area. At least seven policemen and two Okada riders were severely injured in the clash, which lasted for over three hours, while Kuola Station, five vehicles and seven motorcycles were set ablaze by the angry motorcyclists.

We gathered that the violence erupted after an Okada rider plying the area was allegedly beaten to death by a police officer attached to Kuola Police Station for refusing to pay bribe. It was further learnt that the policemen had been extorting money from the Okada riders who carried more than one passenger in recent times.

Trouble started yesterday when an Okada rider who carried two passengers who were students of a secondary school in the area was stopped by a policeman. His refusal to stop and give the policeman money on the excuse that he was carrying students sparked off hot argument between the Okada rider and the police and in the process the Okada rider tried to escape.

But while trying to find an escape route, the policeman allegedly hit him on the head with the baton he was holding and the Okada rider fell from the motorcycle and immediately gave up the ghost. Seeing that the Okada rider had died, residents stormed the scene and the policeman took to his heels. This sparked off protest by fellow Okada riders and youths in the area as about 50 of them besieged Kuola Police Station and demanded that the policeman be produced.

Pleas by the police officers on duty to the Okada riders fell on deaf ear as they intensified their protest by setting the police station ablaze. To quell the protest, about 10 police vans loaded with armed officers, Armoured Personnel Carriers (APC) as well as soldiers later moved to the scene and in the process about 30 Okada riders were arrested by the security operatives and taken to the Criminal Investigative Department, Iyaganku. Mr Ayodele Olowoyile, a community leader in Kuola, while commenting on the incident wondered why the police would still be allowing Okada riders in the area after they had been warned, following increasing rate of armed robbery attack.

A university don, who does not want his name in print, also, while commenting, blamed the police over the crisis, adding that the police ought to have organized seminar for Okada riders explaining the implication of carrying two passengers before beginning to arrest them. He also blamed the Area Commander who led policemen in the operation, saying he ought to have known better.

The state Commissioner of Police, Mbu Joseph Mbu, the Area Commander prevented photo journalists’ from taking photographs, while ordering the seizure of the camera of a photo-journalist with the Nigerian Tribune. As a result of the violence, policemen in the area were forced to leave and relocate to another area.

While commenting on the incident, the state Police Public Relation Officer (PPRO)DSP Lanade Ayodele denied report being speculated in some quarters that some people lost their lives in the clash, while confirming that at least 28 person had been arrested over burning of the police station in the area.

He added that the Criminal Investigation Department at Iyaganku had commenced thorough investigation into the matter. He also appealed to Okada riders to always obey police rules and regulation and to register their motorbike plate number.(Credit: DailySun)