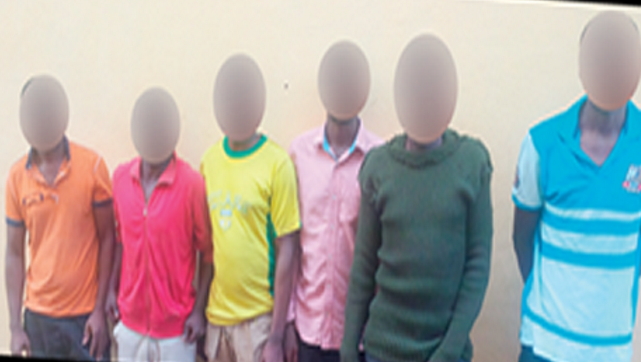 9 suspected kidnappers have been arrested after they pulled a fast one on the families of their victims. The suspects were alleged to have demanded N50million ransom after they abducted Reverend Mrs. Louise Ubah and Engineer Chika Ezenwa.

After a series of phone calls with families of the victims, the kidnappers grudgingly agreed to accept N2.5m ransom. Two brothers-in-law of Louise accepted to go and drop off the money at the designated venue given by the kidnappers.

The brothers were however kidnapped and another ransom demanded before they were released. The gang’s downfall started after one of their gang members, Daniel Gabriel, 33, a taxi driver, was arrested.

According to the police, Gabriel’s arrest was made possible because of credible intelligence gathering. He was arrested by operatives of the Inspector General of Police, (IGP), Mr. Ibrahim Idris’s Special Intelligence Response Team (IRT), led by a Chief Superintendent of Police (CSP), Mr. Abba Kyari. Gabriel was later used as bait to catch other members of the gang.

The leader of the gang, Blackie, is still at large. The kidnappers are alleged to be responsible for most of the abductions recorded within GRA Phase 2, Port- Harcourt main town, Borokiri General Area and YKC axis of Woji. During interrogation, the suspects allegedly confessed to having participated in 15 kidnappings in Rivers State.

Exhibits recovered from them include one AK47 rifle with bridge number 0731, four AK47 magazines with 42 live ammunition, four face masks and a green Mazda Salon operational car. The police source said: “On August 10, 2016, the gang kidnapped one Reverend Louise and Engineer Ezenwa.

Continue Reading
You may also like...
Related Topics:kidnappers, port harcourt