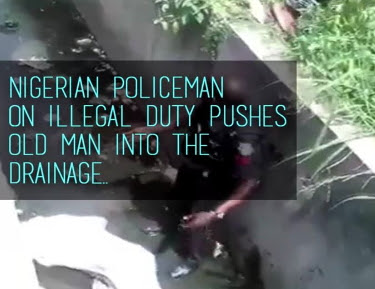 The full video of the elderly man who died on Airport road in Ikeja on Wednesday is out.

According to Sahara TV, the police officer in question allegedly pushed this old man into the gutter in Ikeja Lagos while trying to carry out an illegal raid on a commercial bus.

The old man would have survived the attack if those around had been sensitive enough to take him out of the gutter instead, they abandoned the old man and concentrated on the unidentified police officer who tried to flee from the scene.

This mentality of not touching a dead body has to change.

The victim would have survived if those guys had pulled him out of the muddy gutter.

So sad! May his soul rest in peace.