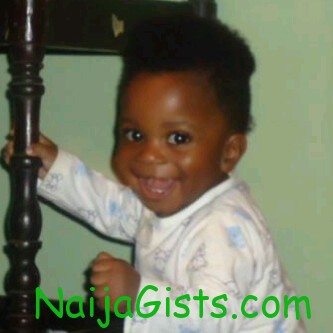 Imo State Police Command on Friday said that it had rescued a nine-month-old baby boy from suspected traffickers in Lagos. naijagists.com

The child, along with a girl, was abducted on 23 November, 2011 by five armed men from the City of Life Hospital and Maternity, Akuma, in Oru-East Local Government Area of the state.

Addressing newsmen in Owerri, the state Commissioner of Police, Mr Adisa Bolanta, said the children were later sold to one Ngozi Ukonu, for N450,000.

Ukonu, a mother of six and operator of Daughters of Zion Motherless Babies Home in Aba, had told police that she received the babies without knowing they were kidnapped.

She claimed that the kidnappers had told her that the babies belonged to their relation, who died at childbirth, adding that she paid for the children because the men claimed they needed assistance.

Ukonu said she had given out about 25 babies in the past eight years she ran the home, adding that the babies were given out to families, who paid as much as N500,000 for a baby boy and N400,000 a baby girl.

The Medical Director of City of Life Hospital and Maternity, Dr Anthony Ilobi, expressed joy over the rescue of the boy, saying the operation had established his innocence.

“When this incident happened, I was arrested and held in custody for two weeks; this rescue will clear any lingering doubts.

“What makes this case painful is that the mother of this boy had a still-birth from a previous pregnancy before she was referred to me,” he said.

The commissioner said the baby was rescued from one “Mama Junior” of Esia Aba, saying the police were also on the trail of the baby girl belonging to one Ifeoma Mbodom of Amaifeke, Orlu.

“Our operatives were able to rescue this baby because we did not allow the case to go cold. We have been following this investigation diligently and it has paid off.

“We are already in the process of rescuing the baby girl who was sold to a retired matron.

“We have four suspects and we will charge them to court as soon as investigations are concluded,” he said.

The suspects in the case are: Ngozi Ukonu, Nneka Ezeigbo, Anayo Udozo and Chidozie Onyenwe.

Mr Mohammed Indabawa, the state Commissioner of Police, made this known at a press briefing in Port Harcourt on Friday.

Indabawa said the command killed 36 robbery and kidnap suspects in shoot outs and arrested 365 others during the period under review.

The commissioner said that the police rescued 17 kidnapped victims during the raids on criminal hideouts.(pm reports)