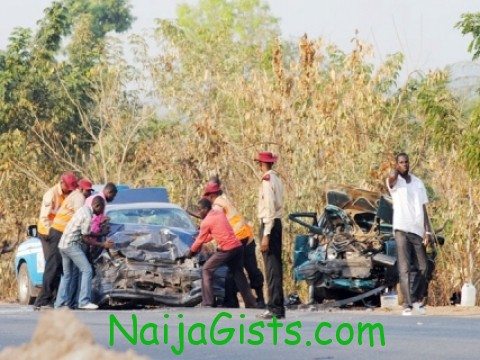 16 people were reported injured in this horrific crash that happen in Yobe State.

The crash was the latest tragedy to befall travellers on Nigeria’s perilous roads, plagued with accidents due to a combination of reckless driving, overloading and poor maintenance.

“Two Toyota Hiace Buses… travelling in opposite directions had a head-on collision and thereafter went off in flames. Twenty nine persons — eleven of them burnt beyond recognition — have so far been confirmed dead,” national police spokesman Frank Mba said in a statement.

This sad incident happened at Nengere area of Yobe state.

Mr Usman Masari the head of road safety commission who confirmed the accident said the two drivers had been speeding.

He described both buses as 18-seaters, but drivers routinely cram extra passengers into vehicles to maximize their income per journey.