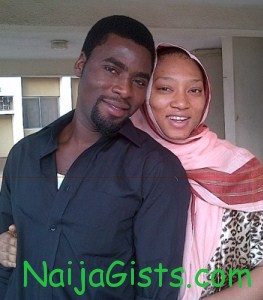 Jan 15, 2013 – Newly Married Actor Ibrahim Chatta: Why I Divorced My Ex-Wife “She Slapped Me For Dating Another Woman”

Contrary to reports making round that he battered his former wife, the actor who debunked the rumour claimed the only day he ever hit her was the day she slapped him for dating another woman.

Ibrahim Chatta claimed his ex-wife has a nonchalant attitude towards him and that’s why he was forced to date another woman who helped him at home.

Hear Ibrahim in his own words below:

“I didn’t batter my ex-wife contrary to what people think,” he insisted. “The only time I hit her was the day she slapped me for dating another woman. We were not married. We dated and we had a baby. The mother of my child never stayed at home whenever I away for movie roles. She was always away and because of her attitude I started dating other women who helped me at home. She was misbehaving so I had to let her go.

“I couldn’t condone her indecent dressing. We were not married but that does not give her the right to misbehave. The mistake I made was to feature her in my movie. The result was that she wouldn’t come home for months. I was the one taking care of our child. Is that a woman to marry? I dumped her because I could no longer cope with her.”

35 thoughts on “Actor Ibrahim Chatta: Why I Divorced My Ex-Wife “She Slapped Me For Dating Another Woman””