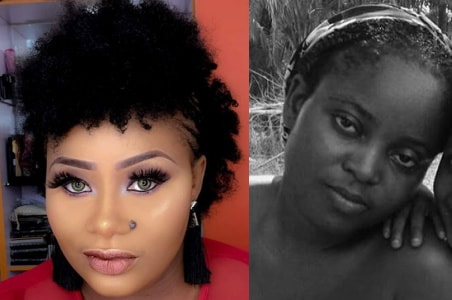 Nollywood Actress Adaora Ukoh has requested for a special birthday gifts from her fans.

The actress who clocks 38 today has asked her fans to lend a helping hand to Breast cancer victim Jennifer Yusuf Nee Abe Isaac.

Jennifer was transported from her village in Benue state to Nazimiye Turkish Hospital in Abuja where she is currently undergoing treatment.

35year old Jennifer Ape Isaac a hard working young lady, a chorister in RCCG a mother, a sister, a wife, a daughter was diagnosed with cancer at age 32, she needs 8 to 10MILLION NAIRA to seek fast effective treatment as it has affected her other Breast. Abandoned by her husband Jennifer determined to fight for her life and also take care of her 5 year old son picked up the job of a house help working from one house to another but the moment her employers find out she is sick they relieve her, she has worked as helps even in her pains
Jennifer had to work to sustain herself and her son, she kept on going in spite of the PAINS, Her son Kefas Benjamin Yusuf had stopped going to school because she couldn’t afford to pay his fees. In the course of her hustle she met Adaora Ukoh a Nollywood actress who employed her as a help, Adaora noticed she was in pains all the time and asked her at first she didn’t want to open up as she feared she was going to lose her job again, Adaora pressured her 2 finding out she had possible stage 3 cancer of the breast at that young age and had been working with it.. Frantic calls made call that same night to Chioma Okoye a Nollywood actress/ producer, asked how they could help, Chioma suggested a fund raising campaign as the two of them can’t raise enough money for Jennifer’s treatment.

Here Appealing to all Nigerians home and abroad2please help JENNIFER fight cancer, we know there are millions of Nigerian’s facing challenges at this time.
Jennifer is a special one, a young mother, struggled to live against all odds
lets help Lil Kefas Benjamin Yusuf hold on to his MOTHER.
REMEMBER….. EARLY DETECTION IS KEY, EVERY WOMAN SHOULD GET TESTED.

A GoFundMe donation  account has been opened for Jennifer.

You can donate towards her treatment by clicking Here.

Thank you as you do.