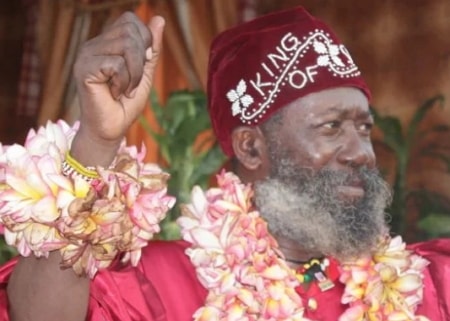 The story making round on the social media is that self-acclaimed sect leader, Sat Guru Maharaj Ji aka Guru Maharaji is dead.

According to sources close to the Spiritual leader in Ibadan, he passed away yesterday evening after a long time battle with tuberculosis.

Since the news broke around 6pm on Friday, scores of people have been visiting the One Love Family cult village popularly referred to as Satguru Village on the Lagos Ibadan Expressway.

Cell phones and Cameras have been barred on the property to avoid taking photos of the self acclaimed Living Master who believes he is a creator who will live forever.

Guru was born on the 20th of December 1947 to Nigerian parents in Ghana as Mohammed Ajirobatan Ibrahim.

The self proclaimed Living Master founded the cult in 1987 based on the divine knowledge he claimed he received while studying in London in 1954.

A source whose camera was seized at the village said many of his followers still believe he will resurrect so they have refused to bury him.