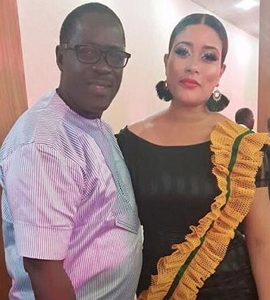 Cross over actress Adunni Ade who was one of the guests at the premiere of Modorisa epic movie at the Oriental Hotel in VI Lagos on Sunday narrated her meeting with veteran actor Taiwo Hassan Ogogo at the event.

“Met him well over 2 decades ago I remember him filming at our home. I recall how shy I was when I was asked to greet him. Who knew years down the line, we would be in the same field? I love his calmness. He has always been one of my favorite actors!! I literally freaked out when I saw him!! #OGOGO @alhajitaiwo.”

The actress who was working in the Housing and Insurance sectors in the United States before switching to the entertainment industry was into fashion modelling, featuring in America’s Next Top Model before she relocated to Nigeria.

Adunni landed her first role in Saidi Balogun flick “You or I” in 2013 and since then, her stars has not stopped shinning.

She is a proud mother to two handsome boys.

Continue Reading
You may also like...
Related Topics:adunni ade, ogogo