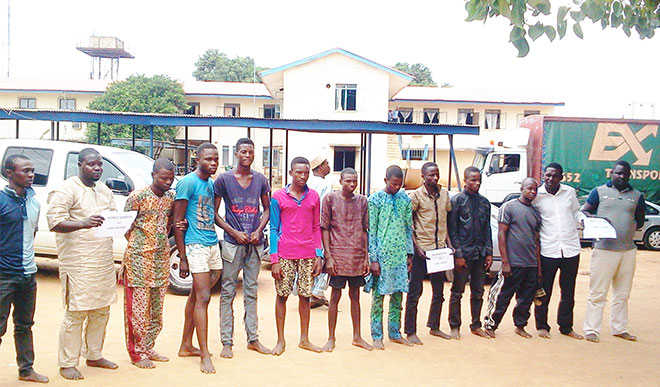 At least 72 people have been arrested by the Kwara State Police Com­mand in connection with the recent communal clash between Share and their Tsaragi neighbours.

Also, 24 other persons suspected to have partici­pated in various cult activ­ities within Ilorin metrop­olis have been arrested by the operatives of the Spe­cial Anti-Robbery Squad (SARS) of the State Po­lice command.

The suspects were ap­prehended early in the morning, between 3am and 6 am at their various hideouts.

Speaking with journal­ists, while presenting the new Federal Special Anti- Robbery squad (FSARS) outfit in Ilorin, the State Commissioner of Police, Esosa Amadasun, said 40 among the arrested per­sons were already being prosecuted in court for their alleged involvement in the communal crisis.

It would be recalled that the two communi­ties clashed recently over land dispute, during which valuable property like ve­hicles, residential build­ings, religious houses, including police van were destroyed.

The police commission­er, who said that no live was lost in the clash, said that peace and normalcy had since been restored in the two communities.

Amadasun said that 24 suspects had been arrested in connection with a recent cult clash between two ri­val cult groups at Agaka and Fagba areas of Ilorin metropolis.

One person was killed during the clash. He said the arrested persons, in­cluding a woman who owns a drinking joint where the suspects usually converged were currently undergoing investigations.

The police boss said: “In a bid to further curb and possibly put a per­manent stop to heinous crimes like armed robbery among others, the FSARS was reformed, retrained, rebranded and reorientated to suit the current trend of globally accepted crime bursting norm.”

The police commis­sioner, who said members of the FSARS, who now wear all black outfits with FSARS written on their T-shirt, added that the new dress code became sacro­sanct for easy identifica­tion and control in line with and in order to give the outfit a distinct identity throughout the federation.

“With this re-invented and re-invigorated FSARS outfit, considering the evolving sound police/ public synergy in Kwara state, I have no doubt in my mind that armed rob­bery and serious crimes in this state will become a thing of the past,” he said.