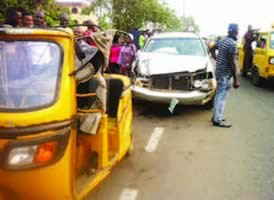 2 people have died, while others were injured after an SUV crashed into a tricycle at the Iyana School bus stop in the Igando area of Lagos State.

The SUV also hit a danfo bus which in turn crushed a tricycle, killing the driver on the spot.

The accident happened around 5pm on Saturday while some policemen were allegedly negotiating bribe with a tricycle driver.