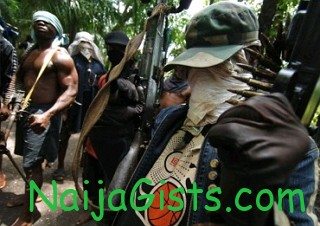 The Nigeria police in Lagos state has arrested three suspected cultists who had in their possession a locally made double-barrel gun, three phones, eight live cartridges with one expended catridge and a perfume suspected to be the substance used to make their victims fall asleep.

We learnt that the three suspects, Ezeani C. George, Nonso Eze and Joseph Igwesi were arrested at Mazamaza area of Mile 2 on Lagos-Badagry Expressway while fighting members of another cult group.

Policemen from the Satellite Division who arrested them claimed they were robbing passengers and dispossessing them of valuables like phones and cash.

But the men claimed they belonged to a secret cult, Aiye Confraternity and that they engaged their counterparts from Eiye Confraternity in a street fight at Mazamaza when they were picked up by the police.

In their confessional statements, the three suspects said they attended tertiary schools in the Southeast. Two of them said they did not finish at their university while the third said he graduated but his parents did not allow him to serve in the North because of the fear of Boko Haram.

Ezeani George, 27, claimed to be a graduate of Institute of Management Technology, IMT, Enugu, where he studied Electrical and Electronic Engineering (Power Option). When he left IMT in 2009, his parents objected to his NYSC service in the North.

“While staying with my uncle in Lagos, I joined my colleagues in the Aiye Confraternity. We were in a beer joint at Ajamgbadi when we learnt that one of us called Fryo had been killed by members of the Eiye Confraternity during a fight in the first week of December.

“On the day we were arrested, we mobilised four members of Aiye to confront the Eiye members who killed our member. When the police arrived the scene, one of us and the Eiye members escaped,” he said. In his own statement, Nonso Eze said he dropped out of university in 2007 and later learnt shoe making at Aba, Abia State.

He disclosed that he rented a shop where he was making shoes, but things became tough for him when his mother became ill. He later travelled to Lagos to work as a bus conductor with his uncle who was a commuter bus driver.

“I know where the late Fryo used to keep his gun. When he died and I learnt there was a fight, I went for the gun to battle Eiye members,” Nonso disclosed.

The third suspect, Joseph Igwesi, 24, who claimed to be from Ekwugo village in Enugu State said said he came to Lagos in 2004 and has been living at Alaba. He said he joined the Aiye Confraternity when he came to Lagos.

A police source said that the suspects were arrested when a distress call was made to them that they were robbing people at Mazamaza at about 2 p.m. on the day of the incident.

After preliminary investigations, the suspects were later transferred to the Special Anti-Robbery Squad, SARS, headquarters in Ikeja. A source at SARS said the suspects will soon be arraigned in court for armed robbery. [source]