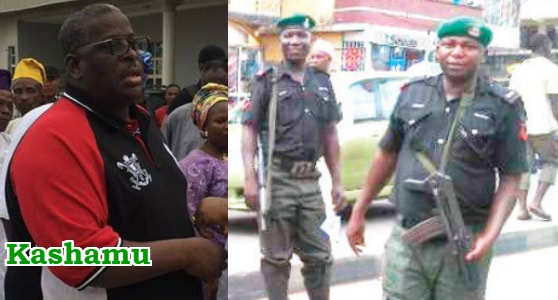 A police inspector, a member of the Oodua Peoples Congress (OPC) and four others have been shot dead as cult violence erupted in Ijebu-Igbo, Ijebu North Local Government Area of Ogun State.

The gun battle, which began on Sunday evening at Oke-Sopen area of Ijebu-Igbo, escalated till the early hours of Monday (yesterday).

New Telegraph gathered that the crisis trailed a political rally organised in Ijebu-Igbo by the Senator representing Ogun East in the National Assembly, Prince Buruji Kashamu.

Several other persons were said to have sustained injuries in the deadly fight which sparked panic and unrest across the town.

But as at press time, soldiers and armed policemen had already been deployed in the town to restore law and order.

The state Police Public Relations Officer, Abimbola Oyeyemi, who confirmed the violence yesterday, said the perpetrators would soon be fished out and brought to justice.

Oyeyemi, who stated that the Area Commander, Ijebu-Ode had been directed to move to the town, however, said only three persons died in the clash.

According to him, a police inspector, one OPC member and a suspected cult member lost their lives in the incident.

The police spokesman, however, advised residents not to panic, saying adequate security measures had been put in place to curtail violence.

New Telegraph learnt that the violence was a result of longtime animosity between cultists and members of local security outfit in the town.

Our correspondent gathered from reliable sources that Sunday’s violence broke out at the PDP rally when suspected cult members spotted a vigilance operative and attacked him.

The vigilance operative was said to have been fingered in the killing of a notorious cult leader in the town about three months ago.

The murder of the vigilante, it was gathered, ignited further attacks and reprisals that led to intermittent gunshots throughout the night.

Sources said while four persons were shot dead during the clash on Sunday, two other persons were killed in a pre-dawn attack launched on Monday morning.

A security source told our correspondent that two policemen were shot in the clash, leaving one of them dead and the other seriously injured.

A resident said the cult members trailed the OPC operatives attached to Kashamu’s tour to Oke Sopen area of Ijebu-Igbo, where they engaged them in serious gun fight.

As at the time of filing this report, a detachment of soldiers, operatives of the Federal Special Anti-Robbery Squad (FSARS) and Anti-cult Unit of the Ogun State Police Command, among others, have been stationed in the town to enforce peace.