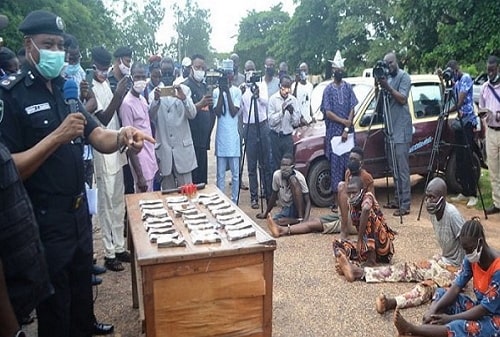 Commissioner of Police Shina Olukolu, while parading the suspects in Ibadan, said a substantial part of the ransom they collected, a gun, two vehicles and one motorcycle were also recovered from the suspects.

He gave the names of the suspects as Rildwan Taiwo, Rafiu Mutiu, Olumide Ajala, Fatai Akanji, Baahiru Mohammed and Rafiu Modinat, the only woman among them who took care of the twins during their captivity. 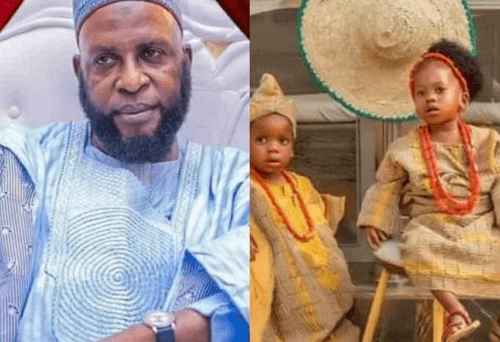 Two of the suspects were domestic workers for the father of the twins.

Olukolu said the suspects were apprehended ;

“following the consistent and concerted efforts put in place by the Command’s Special Anti-robbery Squad, (SARS), Anti-kidnapping Squad (AKS) and other police tactical teams and the unflinching support of the good people of Oyo State through credible information supplied to the police.

“All suspects connected to the case of the kidnapping of the two-year old twins of Alhaji Taofeek Azeez “Akewugbagold” on the 25th April, 2020, have been arrested and substantial parts of the ransom collected with the gun used for the operation, and the two operational vehicles, with one motorcycle were recovered from suspects.

“The notorious criminals attacked his wife and subsequently abducted his two-year old twins to an unknown destination. The criminal assailants later demanded for N50 million ransom before the two abducted babies would be released.

“As soon as the incident was reported at Ojoo Police Station and later transferred to AKS Eleyele/SARS office Dugbe, Ibadan, a team of AKS/SARS operatives swung into action while concerted efforts were intensified to rescue the abducted babies and arrest the perpetrators of the heinous crime.

“The abducted babies were released unhurt eight days later after their father had parted with an alleged sum of four million naira as ransom to the hoodlums.”