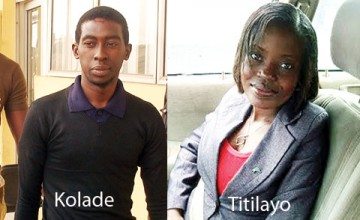 NaijaGists.com have received several emails from concerned fans of late Titilayo Arowolo who was brutally murdered by her husband following a serious argument back in June 24, 2011. naijagists.com

Latest update on Akolade Arowolo’s trials : The case has been adjourned till the 28th of September after a police witness, Mr Baye Cletus refused to show up in court.

During his hearing on Monday, the prosecutor, Mrs O.O Eboda said Cletus has travelled for his dad’s burial.

“My lord, the police witness, who is also the Investigating Police Officer at the Aswani Station, where the matter was first reported, told me yesterday (Sunday) that he had travelled to his village to bury his father. He pleaded for an October date,” she said.

Cletus, the 12th witness for the prosecution, had given part of his testimony on June 26, 2012, wherein he said it was Akolade’s father who first came to report Titilayo’s murder to the police.

Justice Lateefa Okunnu condemned the Police officer’s absence in the trial describing it as gross indiscipline.

She said, “I will not adjourn the matter till October because of him (Cletus). It’s either he comes back or I ignore all his evidence. He shouldn’t have done such during a criminal trial. I give him till Friday to return.

“This is the kind of behaviour that should be reported to the Commissioner of Police or the Police Service Commission. I will never condone such behaviour. This is sheer disrespect for the court and the rule of law.

“In a developed society such could never happen. Where are we going in this country? When there is no law, there will be anarchy. I give him till Friday to return. If he is not here, the next witness better be.”

The case has been adjourned till the 28th of September 2012 for hearing.

We hope the late Titilayo gets the justice she rightly deserved.