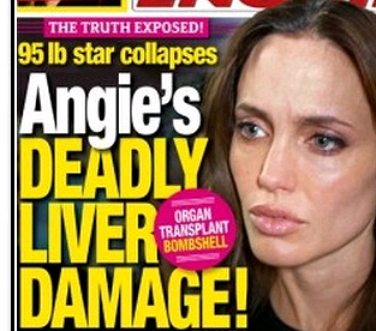 According to the latest news from National Enquirer magazine, Hollywood movie star, Angelina Jolie is currently suffering from a deadly liver disease (Hepatitis C) which she contracted in her teenage years due to alcohol & drug abuse. naijagists.com

The report further stated, Angelina Jolie‘s liver disease is the cause of her constant weight loss and that the actress is awaiting liver transplant.

To counter the above rumour, Angelina Jolie’s spokesperson said the news is not true. She claimed her frequent weight loss is due to stress of constant travel and her role as a mom.

The spokeswoman further stated the actress often forget to eat and drink because she is always on the move.

Hmmmmmm! How can a person forget to eat and drink?