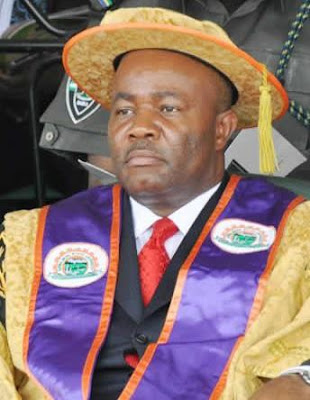 The controversial governor who is popular for spending Akwa Ibom’s fund lavishly has rewarded an electrician who returned his missing $250,000 with a whopping one million naira.

According to Premium News, Bundles of mint-fresh dollars, valued at over $250,000 (about N40 million), which disappeared late last month from Governor Godswill Akpabio’s bedroom at the Akwa Ibom state governor’s lodge in Asokoro, Abuja, have been recovered intact.

SaharaReporters, had last month reported that the missing dollars, kept in drawers in the governor’s bedroom, were stolen while he was away dinning with President Goodluck Jonathan at the Aso Rock Villa a fortnight ago.

PREMIUM TIMES has now learnt that the missing money was recovered a week after it disappeared.It was found by an electrician invited to carry out minor repairs on one of the air conditioners inside the governor’s bedroom at the lodge.

Mr. Akpabio, who is well known for his profligacy with state funds, had reportedly ordered the dismissal of three stewards working at the lodge, suspecting they stole the funds.
However, unknown to the governor, the trio knew nothing about the missing money.

The culprit, a senior Akwa Ibom official close to the governor said, was actually one of the drivers attached to the office of the governor’s Special Representative in Abuja, who is the caretaker of the lodge.

The driver reportedly sneaked into the governor’s room and removed the dollars from where they were kept.

But because of the security around that section of the lodge, he cleverly tucked them inside the compartment of the air conditioner until a more convenient time he would be able to smuggle his fortune out.

Officials, who spoke to PREMIUM TIMES, said a week after the money was declared missing, it was observed that one of the air conditioners in the governor’s bedroom malfunctioned.

The driver plotting to steal money was, ironically, detailed to fetch an electrician to fix the failing AC ahead of the governor’s next visit. The electrician was called in as he had handled similar repairs in the past at the lodge.

On their way to the lodge, according to officials, the driver confessed to the technician how he had left “something” valuable inside the air conditioner, and which he expected him to retrieve for him, promising a huge reward if he did so successfully.

However, because of the extra security arrangement in place around the lodge following the incident, it was learnt that it proved difficult for the electrician to deliver on his promise, as one of the security operatives working at the lodge was promptly detailed to supervise the repairs.

On opening the air conditioner for repairs, the electrician was reportedly surprised that true to the driver’s earlier hint, there was a carefully wrapped parcel inside the appliance, preventing the system from functioning normally.

The electrician was said to have promptly alerted the security operative detailed to work with him about his find; and on opening the parcel, it was discovered that bundles of the missing money were actually inside.

Afraid he might be held as suspect in the incident, the electrician reportedly confessed to the operative about the favour the driver had sought from him on their way to the lodge.

The money was promptly handed over to the governor’s aide, who on breaking the good news to the governor, was ordered to give the electrician N1million cash as reward, while the dismissed stewards should be recalled immediately, although they were redeployed to other assignments.

What is dollars doing in Governor’s room for God sake… Isn’t this looting?