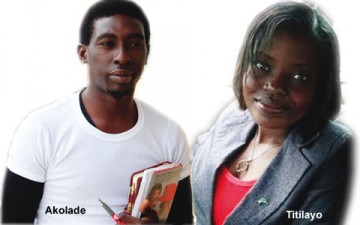 Akolade Arowolo, accused of killing his banker wife, Titilayo Arowolo,  yesterday, told an Ikeja High Court how he struggled with his slain wife while he was allegedly attacked with a knife by the deceased.

Akolade, who was led in evidence on his defence by his lawyer, told the court that nothing could have made him to kill the deceased, because of the love he had for her.

“I am not that kind of person, I loved her so much and I also love my daughter Olamide too,” Akolade said.

Giving his account on what happened on the fateful day, Akolade said he received a call from his father on his birthday around 10 a.m. and several other calls before he left home for the bank to cash some money for the birthday celebration.

Arowolo said on his way home, he met his mechanic whom he had called earlier to fix the shaft of his Honda Accord car, to allow him and his late wife pick up their daughter, Olamide, from his in-laws’ house.

According to him, on getting home, he knocked at the door and his wife opened, dressed up as against their earlier discussions  to stay in-doors  to watch Big Brother Africa show.

Arowolo said this led to some disagreements  between the two of them, where he reminded her of all what she said about determination to be a good housewife.

Akolade said instead of listening to him, his late wife slapped him and immediately his wife’s father, George Oyakhire’s call came in and she picked the call and told him that he should tell Akolade to leave her alone.

He added that after some time, he went to meet one Mama Hanna Alaka, their neighbour, over what his wife did, and pondered that something must have been wrong with her.

I saw my wife with knife

Akolade said he saw his wife with a knife, but did not know what she wanted to do with it.

He said: “Omo (his wife) used to take alcohol, some wine and Smirnoff ice and she had taken some before I left home in celebration of my birthday.”

Emphasizing the love he had for the late wife, he said: “I loved my wife so much not to want to see her hurt. And that’s why I did all I could to ensure we stayed together. I loved my wife and my daughter, Olamide so much.”

He also said he tried to protect the woman and himself which led to his jumping out of their staircase.

He said he was caught unawares and he tried everything he could to avoid the stabs and took the knife from her, adding that she didn’t give him any reason for her actions that day but only continued to lash out at him.

“I was trying to regain my balance and was shouting; “Omo, what’s wrong with you. But rather than answer me, she was shouting, I will kill you and kill myself. While I was trying to calm her, she came at my navel and I had no choice than to disarm her.

“The knife had cut my right palm into almost two and I had other cuts. I was bleeding all over and we were struggling for the knife until we fell down on the bed, the struggle continued and in the process, I sustained other lacerations and the knife dropped from her hand.

How I jumped from the verandah

“I then asked, Omo what’s all these? And she said she was sorry. I told her to be calm while I get help but the door was locked and the key was not there. I kept asking Omo, where’s the key and she was pointing at some places and I was scattering everywhere to locate the key.

“I didn’t see the key. What came to my mind was to break down the door, I ran to the kitchen, took a long spoon, hammer and knife but when I couldn’t get it opened, in annoyance I threw the things on the floor and jumped from the verandah.”

He added that it was at that point that his mechanic brought his car and he entered it and went to the nearest police station to get help, adding that he didn’t get there before he saw some policemen but while talking to them, a car hit him and he lost consciousness.

Akolade added that a good Samaritan took him from the place on a commercial motorcycle but he couldn’t say what happened as he woke up next day on the dump site of a public school.

Speaking on his wife’s reaction, Akolade stated that she was either drunk, mentally sick or hypnotised.

“Her actions and behaviour were not consistent with the wife I left at home wearing my boxers and a see through top.

Justice Okunnu adjourned the matter till September 17, 2013 for adoption of written addresses.