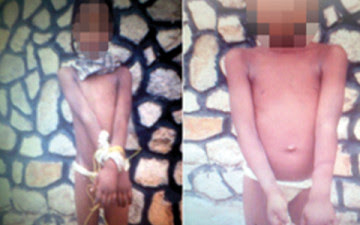 A 42-year-old father, Mr. Edet Etok-Akpan, is currently being quizzed at the headquarters of the Cross River State Police Command in Calabar for torturing his six-year-old daughter, Edidiong, as a result of a church prophetess’ pronouncement that the girl was a witch.

Edidiong was beaten by her father and locked up in a room with her hands, mouth and face bound for four days before she was rescued by neighbours.

It was learnt that Etok-Akpan started beating her on February 19 after an unidentified prophetess in their church told him that Edidiong was the witch responsible for the stagnancy in his life.

Narrating her ordeal to PUNCH Metro on Monday, Edidiong said after the beatings which lasted for some days, her father on February 21 tied her hands with a cord and bound her mouth with a piece of cloth.

She said, “He locked me in the inner room of our house and he never gave me food and never allowed me to go to school.”

The girl, who said she is in basic three at Femos Nursery and Primary School located at 24 Etyin Abasi Street, said she was becoming weak after days without food or water.

Luck, however, came her way on February 23, when another child, who lives with her parents in the same 42 Atakpa Street, came to their veranda to look for broom and discovered her.

Giving details of how she was rescued, a lawyer with the Basic Rights Counsel, Mr. James Ibor, said, “The girl went to Edidiong’s veranda to look for a broom and heard the sound of the girl like that of someone battling with her last breath.

Ibor said one of the neighbours called him and he in turn informed the police.

He said, “When the policemen and I got there, we saw a crowd gathered outside. We were able to rescue the child by breaking the door.

“The girl was very weak because she had been without food for days and so we had to give her water first, then after about ten minutes we gave her milk before solid food an hour later.”

Ibor said the culprit and his wife had locked up the girl in the inner room of their two-room apartment and went to church, adding that the girl was presently living with her grandmother in another part of the town.

The state Police Public Relations Officer, Mr. John Umoh, said Etok-Akpan, who is from Akwa Ibom State, had been arrested and would soon appear in court to answer charges of felony.

He said, “To tie a small girl’s hand and mouth and lock her in a room for some days without food is a grievous offence, he shall soon appear in court.”

Umoh, a Deputy Superintendent of Police, warned parents to always treat their children with care, adding criminalities are increasing daily because parents had abandoned their responsibilities to their wards.

He also said the police would visit the church where the father got the prophecy.

Patience Jonathan Vs Aki: What Was She Thinking?
Blackout At Murtala Muhammed International Airport In Lagos; Flights Diverted To Lome, Togo