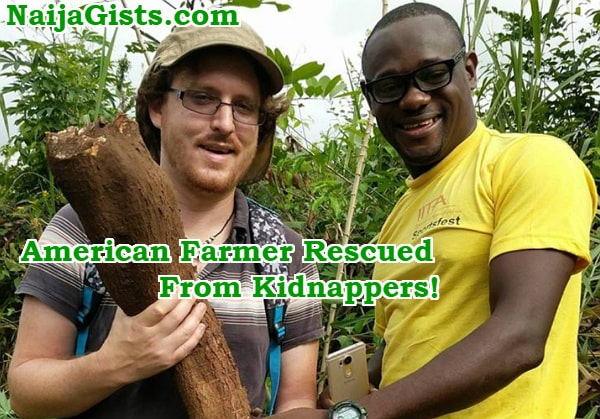 Police in Oyo state have rescued a scientist with the International Institute of Tropical Agriculture (IITA), Ibadan, Dr. Elliot Kulakow, an American citizen from kidnappers unhurt.

He was rescued along with a Nigerian citizen, Latifat Togunde, a member of staff of IITA, both of whom were kidnapped on March 14, 2019, at about 5:20 p.m.

Three suspects, however, have been arrested in connection with the incident. They are Mohammed Isah, 25, Ishaka Mohammed, 27 and Adamu Ibrahim, 20. They were paraded before journalists in Ibadan on Friday. Exhibits said to have been recovered from them included tree expended shells of AK 47 ammunition.

Commissioner of Police in the state, Mr. Shina Olukolu, said Kulakow and Togunde were forcefully taken by gunmen while on their farm at Oderu village, via Elekuru, Moniya, Ibadan, which is approximately 25 kilometers away from headquarters of IITA.

He explained that an Assistant Security Officer of IITA had reported the case to the police on the same day, the victims were kidnapped, saying: “In the course, of taking the victims away, one Rafuliu Adebayo was shot in the neck by the armed men, who happened to be with the victims when the incident occurred and, he later died at the University College Hospital (UCH), Ibadan while on treatment.

“On the receipt of this information, the men of Anti-Kidnapping Squad led by Olawale Tiamiyu, a Chief Superintendent of Police (CSP), swung into action and this led to the arrest of the duo of one Mohammed Isha and Adamu Ibrahim. Mohammed Isah happened to be a security guard and errand boy to Elliot Kukakow at his private farm.

“Following a diligent investigation, Mohammed Isah confessed to having masterminded the kidnapping through the help of Ishaka Mohammed, who was later arrested in his hideout on March 29, 2019, at Ido Local Government of Oyo State, while attempting to escape to Birnin-Kebbi in Kebbi State.

“These victims were later rescued unhurt while the investigation is still on to arrest other fleeing suspects.”