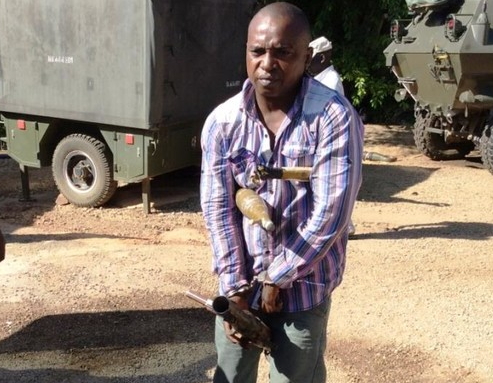 The police in Plateau on Thursday arraigned a man for illegal possession of a Military RPG Bomb in a Federal High Court sitting in Jos.

The 37-year-old accused, Nanpon Sambo alias Yabang, was arrested on June 18, 2016 at Bani Hotel, Langtang North Local Government by men of the Military Joint Task Force (JTF) keeping the peace in the state.

Sambo is being tried on a two-count charge of unlawful possession of firearms contrary to Section 3 and punishable under Section 27 (1b) of Fire Arms Act CAP F28 Law of the Federation of Nigeria, 2004.

At the resumed hearing, the Prosecuting Counsel, Mrs Kuturah Saliyuk, told the court the Department of State Services (DSS) had been trailing Sambo since 2013, adding that he was arrested on June 18, 2016.
The Counsel to the accused, Mr Lawrence Anya, applied for his bail.

“My Lord, the suspect and my client is very sick even before the day he was arrested and is still sick while in the custody.
“Moreso, my Lord, the offence under which my client is being detained is a bailable one and I urged this court to consider my application and grant the suspect bail,’’ Anya argued.

But, Saliyuk opposed the application, arguing that even though the offence was bailable, the nature of the weapon, was dangerous for an individual to have in his possession.

“My Lord, I object to such bail application because the suspect by reason of his antecedence, will abscond; it took three years for the DSS, who have been on his trail to arrest him.
“For individual to possess such a military weapon without the consent of the president of this country is a very serious offence that should be treated with all seriousness.
“The suspect had with him ,the RPG Launcher, RPG Charger and RPG bomb, which are complete for use and such a person should not be toyed with and I so applied that the application should not be granted, ’’ Saliyuk objected.

The judge, Justice Dorcas Agidi, after listening to the arguments of the two counsel, adjourned ruling on the bail application till Oct. 20.