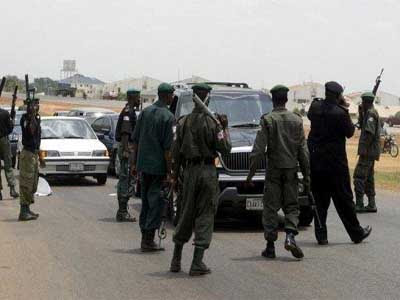 Three other persons hit by Abubakar’s bullets were rushed with severe injuries to the Accident and Emergency Ward of the Lagos University Teaching Hospital (LUTH), Idi-Araba, yesterday night.

The trio were said to be in stable condition, while the fourth person died on arrival at the LUTH.

The victims, three men and a pregnant woman were allegedly shot by Corporal Abubakar from MOPOL 17, Akure, Ondo state in Diamond Estate, Festac Town, following a disagreement over a matter.

It was gathered that the police corporal, who was suspected to be drunk at the time of the incident, shot the four victims.

The Guardian learnt that the disagreement occurred that night at the fast food joint where they sell mainly noodles. The angry corporal opened fire on the victims and took to his heels immediately.

The policeman who is now at large is not attached to the Lagos Police Command. He was said to be on an unofficial visit to a company in Diamond Estate, Festac Town.

Meanwhile, when The Guardian visited the Accident and Emergency Unit of LUTH, experts who assured that they would survive the gun wounds were attending to the three surviving victims.

The consultants regretted the death of one of the victims, blaming his demise on the bullet wound and the late arrival of the patient to the hospital.

A consultant who spoke with newsmen on the condition of anonymity disclosed that of the three surviving patients, the two men would go for surgery because of the nature of wounds sustained from the gunfire and also to retrieve bullets pellets from their bodies.

“The pregnant woman who appears to be a bit more lucky will not need surgery, she will undergo intensive and general care and be discharged. One of the men was shot in the eye, Ophthalmologists are working hard to ensure the wound does not degenerate; he will be wheeled into the theatre for surgery.

“The second man was shot in the thigh, he will also undergo surgery, apart from the damage done on the site of the wound, there are indications that bullet pellets lodged in the muscles need to be retrieved,” he said.

“The hospital has drafted a team of experts to ensure that they are well taken care of medically”, she said.

When contacted, the Lagos State Commissioner of Police (CP), Alhaji Umar Manko confirmed that a police corporal from MOPOL 17, Akure, Ondo State was responsible for the shooting.

“The corporal is not from the Lagos State Police Command. He is from MOPOL 17, Akure. He was attached to a company in Festac town, but I wonder what a mobile police man from Akure is doing in Lagos,” he querried.

The CP said he has asked the Area Commander for Feastac area, Mr. Dan Okoro, an Assistant Commissioner of Police to contact his Squadron Commander to explain what the policeman from his unit was doing in that company at that time.

Manko disclosed that the command has declared a manhunt for the corporal who took to his heels after committing the act.

Another eyewitness told The Guardian that the corporal went to the fast food vendor to eat noddles when quarrel broke out between him and other customers. The source said in the process, he fired sporadically and took to his heels.

“The policeman would have been lynched by the angry mob, but they were afraid to go after him as he was fully armed,” the eyewitness said.