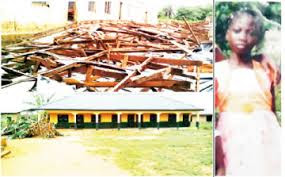 Adedeji, who was a pupil of Favour Nursery and Primary School, was the granddaughter of the proprietor, Pastor Joseph Olitoye.

It was gathered that Umoren allegedly killed the pupil because Olitoye owed him N8, 000 – the suspect’s salaries for January and February.

Umoren, also severed off the right hand of the 10-year-old girl after seizing and dragging her into a nearby bush, a day after her birthday.

The assailant, who was also said to be the treasurer of the school proprietor’s church, was alleged to have seized Adedeji when she and her friend, Patricia, were returning to the school from where they had gone to buy biscuit.

Patricia, it was learnt, escaped from the scene and ran back to the school premises to inform the proprietor of the attack by “Uncle Edet.”

The proprietor said he had pleaded with Umoren to exercise patience till the end of this week to enable him to pay the salaries owed him.

Olitoye disclosed that Umoren left two short notes at the scene of the crime, claiming that he killed the girl because of the failure of the proprietor to pay him his two months’ salaries of N8,000.

He said, “Edet resumed school this morning (Thursday) like every of our staff and we discovered that he left around 10am not knowing he went to plan this evil.”

The distraught Olitoye said he had planned to terminate the appointment of the teacher on Friday over alleged disobedience, which made him to issue him a query before he committed the crime.

He also alleged that the assailant, who until the incident, was the treasurer of his church, had allegedly stolen over N250,000 from the church’s fund.

Adejobi, a deputy superintendent of police, said detectives picked up the suspect at about 5am on Friday.

He said the Commissioner of Police, Abdulmajid Ali, had directed that the suspect should be transferred to the State Criminal Investigation Department for investigation.