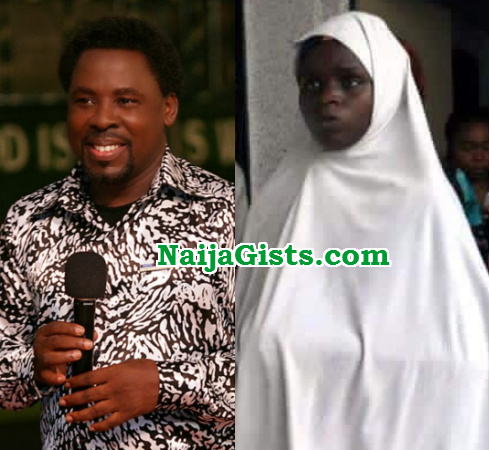 March 5, 2016 – Ese Oruru’s Parent Must Not Take Her To TB Joshua For Deliverance – Pastors Warn

Ese Oruru and her family have relocated into officers mess in Yenagoa Bayelsa. The State Police command did this to shield the troubled family from the public.

While address journalists yesterday, the Chairman of Civil Liberties Organisation Nengi James Orioworio, said it was better Ese was shielded from the public because of stigma. “We know the implication of what has happened to her. My own thinking is that it is the stigma they are avoiding. If they expose her too much, she may even kill herself. So the best option now is to protect her from the public. It is even better the family should relocate, that is the only thing that can save that girl’s future,” he said.

He added that if the girl must live longer, isolation is the best answer.

A Pastor who simply identify himself as Pastor Ese, while reacting to the purported plan of Ese’s parents to take her to Prophet T.B Joshua of the Synagogue Church of All Nations (SCOAN) for deliverance, said the issue does not arise because according to him, there are other notable men of God that could deliver Ese in Yenagoa including himself.

The pastor of Ese’s local church (Distinguished Peoples Assembly), where she used to worship before the abduction, Mr. Dotimi Egbegi, who is also the chaplain of Bayelsa State Government House, was not available as at the time of filing this report but in a telephone call put through to him by his secretary, he said there was no need going to T.B Joshua. According to him, the whole church – DPA prayed fervently when the girl was abducted.

Her abductor Yunusa is undergoing criminal prosecution in Bayelsa state.