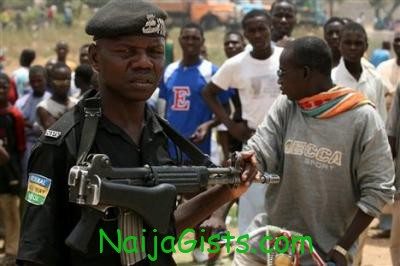 Some angry youths in Kogi State, on Sunday, beat up a Divisional Police Officer (DPO) and injured two others in a protest against what they termed the illegal arrest of some of their kinsmen. naijagists.com

The youths, who attacked the Egume division police station of the state, set a police van ablaze and carted away ammunition.

The State Commissioner of Police, Amana Abakasanga who confirmed the incident, said: “I got a distress call that some hoodlums had taken over Egume Police Division, kidnapped the DPO and wounded two of my policemen.”

Abakasanga said seven suspects had been arrested in relation to the incident and handed over to the state’s Criminal Investigation Department (CID) for further investigations, while two AK47 rifles had been recovered.

He also said security officials (anti-riot police) have been deployed to the area to quell any violent uprising.(daily times)