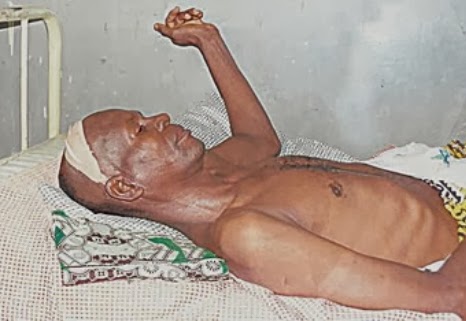 Oyo State Police Detectives are battling to unravel the mystery behind the death of two brothers one after the other and an attack on their uncle accused of killing them with a deadly anti-adultery charm, magun, laced in the bossom of his wife and that of his brother’s.

The uncle is lying critically ill in a hospital in Ibadan after irate youths attacked him following the death of the second man.

The incident happened at Jagun community near Iyana Ofa, Lagelu Local Government Area of Oyo State, a serene settlement where people whose lifestyles are closer to nature dwell. Residents are mostly farmers while others engage in one trade or the other. The youth among them are artisans.

The serenity was, however, broken towards the end of 2013 when two blood brothers, Kunmi and Adeniyi Adetokun, died, one after the other, within three days, allegedly of a local charm used to punish adulterous men, commonly referred to as magun in Yoruba.

This literally translates ‘don’t climb’ in English. But the two brothers climbed the metaphorical mountains that were too high for them. And they somersaulted down the hills, breaking their necks in the process.

The occurrence, however, sparked off anger among the youth of the community, resulting in them setting ablaze the residence of the Balogun of the community, Chief Segun Oyetade, the deceased’s uncle, as he was suspected to have been responsible for the duo’s death. They also attacked him with weapons but was only saved when the youth got a hint that policemen were approaching.

On December 5, three days after Kunmi’s death, his younger brother, Adeniyi, was also reported to have died of unknown ailment which he battled with for a couple of weeks after allegedly sleeping with the wife of Chief Oyetade’s brother, whose name was given simply as Femi.

According to the information gathered by Saturday Tribune, Niyi was the one who fell ill first after he slumped and started vomitting blood. His brother, Kunmi, was reportedly taking care of him at a hospital at Lalupon community.

It was further learnt that Kunmi left Niyi at Lalupon and went to Jagun community where he allegedly had sex with his uncle’s wife. His own illness did not take much time before it consumed him and he died three days after it manifested. Having noticed this, Niyi reportedly opened up that he slept with Femi’s wife, which confirmed the suspicion of the villagers that he must have been hit with the deadly charm.

A member of the community described the type of magun used on Niyi as Olorere which usually takes days or weeks before killing the man who sleeps with the woman laced with such.

After Kunmi’s death, Chief Oyetade was reportedly summoned by the Baale of Jagun community, Chief Isiaka Akinpelu, who asked him about the allegation that he laced his wife with magun. The man denied and the Baale appealed to him to find the antidote so that Niyi could be healed.

The Balogun reportedly came back to the village head to demand for N4,000 which he said was the fee demanded by the herbalist who volunteered to prepare the antidote. Members of the community were said to have contributed the money but before he brought it, Niyi gave up the ghost.

Niyi’s death after his brother’s spurred the community’s anger as Chief Oyetade was also accused of sleeping with the mother of the two brothers, which prompted the question on why he should be angry that someone was having an affair with his wife or his brother’s wife, to the extent that he could aim at killing the brothers.

The anger led to the attack on him while his house was set on fire and his wife and children sent out of the community in the dead of the night.

Chief Isiaka Akinpelu, who was said to have got a hint of the youth’s plan to attack Chief Oyetade, had reportedly gone to Iyana Ofa Police Division to quickly give the information to the police but before they got back to the village, the youth had struck. As they saw the approaching policemen, they were said to have fled in different directions, leaving the injured chief to his fate.

However, Chief Oyetade, during an interview with Saturday Tribune on hospital bed where he was receiving treatment, alleged that it was the Baale who sent the youth to attack him because of a tussle between them over a piece of land.

He denied the allegation that he laced the women with magun, saying that his accusers were only trying to tarnish his image.

“What I only heard was that Niyi was sick, but I didn’t know the kind of ailment because he was living at Lalupon. Later the Baale called me and some elders, saying that my nephew, Femi, laced his wife with magun, which resulted in Niyi’s illness. I didn’t believe the allegation because Niyi had been ill for some weeks and from the story we used to hear about magun, it doesn’t take so long before being felt.

“They went further to say that I was the one who gave Femi the magun which he laced his wife with, accusing me of doing same for my wife, which led to Kunmi’s death. I exclaimed in shock, disclosing that my wife was pregnant and wondering how one would lace a pregnant woman with a charm such as magun.

“It was after this that Chief Akinpelu said he was after the wellness of Niyi, tasking me and the head of Niyi’s family, one Mr Adewale Adekambi, to go and look for the antidote. By then, Niyi was being cared for in Ibadan and it was Ibadan we went to seek the antidote. Unfortunately, Niyi died on Thursday, December 5.

I joined Niyi’s sibling, Seun and his aunt in taking the corpse away from where he died. As we wanted to take him to the cemetery, his brother said we should take him home, unknown to me that it was a trap set for me. As soon as I disembarked from the vehicle, hoodlums descended on me with sticks, pestle and cutlasses. I kept asking them of my offence and when they saw that I did not collapse, one of them struck me with an axe on the head and I fell down.

“A sympathiser called the Baale to inform him of what happened to me but before he came, I was already crawling away. A community member saw me and jeered at me, saying: ‘Where are you going? Your house and property are still going for it.’

He said the disagreement between him and Chief Akinpelu occurred when he sold his own father’s parcel of land and the Baale challenged him by saying that he did not inform him. “He has no business with the land. My brother and I agreed before the land was sold and it belonged to our father,” Chief Oyetade said.

Saturday Tribune gathered that the police detectives, led by the Divisional Police Officer, Iyana Ofa, Mrs Justina Ogunleye, took the victim to a nearby hospital for medical treatment.

Chief Oyetade’s wife, Rachael, also narrated her ordeal thus: “I was invited by the Baale and he asked me about Kunmi’s death. I told him that I did not know anything about it. I also swore in the presence of the elders seated, asking if anyone of them had ever seen my nakedness. It was when I was raining curses that the Baale asked me to go.

“On Thursday, December 5, my husband travelled to Ibadan and told me he was not coming back. At about 11:00p.m., I heard a knock on my door and when I opened, I saw four men who asked me to leave with my children without picking a pin, threatening that if I delayed, they would burn us with the house.

“I slept in the bush with my children, among who was a two-year-old, and at dawn, we trekked to a town near Ibadan, from where we took a bike to Iyana-Ofa. From there, I boarded a bus to Ibadan. I tried to contact my husband but could not get him. It was later I learnt that he had been attacked.”

When contacted, the police spokesperson in Oyo State, DSP Olabisi Okuwobi-Ilobanafor, confirmed the development, disclosing that two of the suspected arsonists and attackers had been arrested. She added that the Commissioner of Police, Mohammed Indabawa, had ordered that the case be transferred to the State Criminal Investigation Department (SCID), Iyaganku, Ibadan, for further investigation.

[Reported By The Nigerian Tribune]