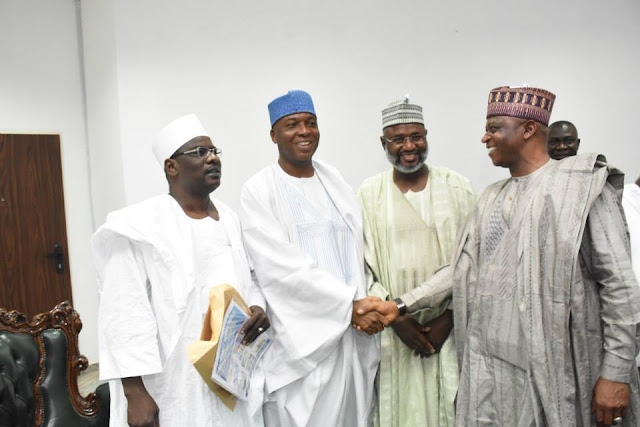 The Last-minute Meeting Between Saraki And PDP

The last-minute deal between the PDP and Saraki was sealed at the residence of former Senate President David Mark in Abuja. At the meeting which held Sunday night were PDP Senators and governors. The meeting lasted till the wee hours of Monday. The session was tense on who to support for the leadership of the Senate and House of Representatives.

A top source said: “At the end of the day, we could not agree on bloc votes for any of the candidates for the Senate and House of Representatives. In fact, Governor Ayodele Fayose pleaded with party leaders to see the battles as one between PDP and Asiwaju Bola Tinubu. He begged the party to ‘clip’ Tinubu’s wings.

“But some senators-elect warned Fayose against going personal. They queried the morality behind PDP supporting candidates who defected from the party to APC. They alleged that their defection led to the defeat of PDP at the Centre.

“The governors also split on who to back for the National Assembly offices. At the end of the day, we could not reach a consensus on casting our votes en bloc for any of the candidates for the leadership of the National Assembly. I can tell you that everyone was on his own.”
Notwithstanding, the PDP senators later opted to vote on Monday night on who to back in the Senate. In the wee hours of yesterday, 28 opted for Saraki/Ekweremadu ticket and 17 consented to Ahmed Lawan/George Akume ticket. The same voting strength was taken to the inaugural session of the Eighth Senate.

A source added: “We were at a crossroads on whether to forgive Saraki for defecting to the APC or paying back the APC in its own coins for making Aminu Tambuwal, the Speaker of the Seventh Senate, to defect in defiance of the PDP directive. We basically went for vengeance because all is fair in politics.

“Our assumption is that were it not for mismanagement of PDP crisis, the likes of Saraki are PDP in spirit and APC by circumstance. When there is realignment of forces, we believe we can still work together.”
But findings confirmed that the choice of Saraki was with a cost. The new President of the Senate was ‘forced’ to sacrifice his favourite for the Office of the Deputy President of the Senate, Sen. Ali Ndume, who was the arrowhead of Saraki’s campaign in the North. Although Ndume got a wind of the plot on Monday evening, he dismissed it as “distracting and impossible for Saraki to dump him.”

Another source added: “Till the last minutes, they sold a dummy to Ndume that he will be Deputy Senate President of the Senate if Saraki gets the ticket.

“But as soon as Saraki won, Ekweremadu was nominated for delivering bloc votes of the Senators-elect from the Southeast in collaboration with Senator Andy Uba.”