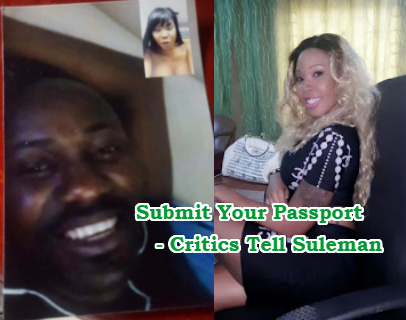 The image of Omega Fireman Apostle Johnson Suleman is on the verge of total destruction after Canada based Stephanie Otobo accused him of having unholy romance with her.

Well critics have called on the pastor to prove his innocence by passing the following tests:

(1) Submit his passport to police for examination to show he was never in the same foreign country listed by Otobo at the same time. Stephanie listed Italy and New York .

2.) He should provide evidence that the money he gave her were for business and assistance.
And the amount should be in the church’s records. Or in the records of his personal expenses clearly identified as such.

3.) He should tell Nigerians what the subject of blackmail is.
And details of when the blackmail and extortion started, and what he did to the threat.

4.) Submit his phones, iPad and laptop for forensic examination to show that he never had sexual conversations with Stephanie.

Stephanie Otobo should provide all the telephone numbers and accounts used in the so-called conversations and chats.

5.) He should present himself to the police where both parties will be interviewed.

Since a crime of extortion and blackmail is being pursued, not to talk of the libel of monumental proportion, the meeting will go a long way between accuser and accused.

According to Encomium Magazine, Stephanie Otobo also need to provide the exact dates, places and events that can be easily corroborated and not the flippant details she is providing to the media.