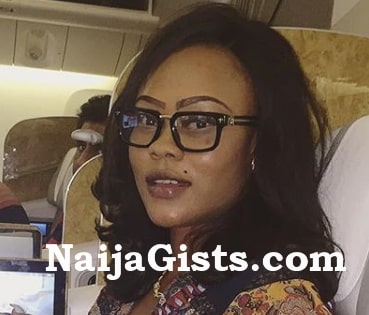 Few days ago,  Daniella Okeke became a hot topic, after she posted raunchy pictures of herself on social media, which instantly went viral.

However, in what she described as an innocent move, the role interpreter stated that she is a very shy person. “When it comes to my sexiness or sexuality, I get very uncomfortable. Surprised? Yeah, but it is the truth. Someone once told me ‘Daniella, God has blessed you with a bad girl image, use it to your advantage…

“I hardly show off my sexy side because it does make me uncomfortable, but I am making an exception of today because I am a beautiful woman who is blessed and wonderfully made… this is a beautiful picture and if you don’t like it, you are a hater!”

Daniella had scarcely posted the raunchy images when fans hit her with comments. While some gave her kudos, others gave her knocks. And reacting to a comment that got under her skin, she posted: “Imbecile, go and die! Don’t come and fool yourself on my page. You’re dumb and the Internet controls your thinking.”

She shot at another fan: “You really don’t have to like my picture, I am just being me.”

However, a concerned fan said: “God blessed you with a bad girl image… that has to be the most ridiculous statement I have ever heard.”

And another posted: “Since when did you become a shy person… this is who you had always been!”

While also lambasting her, a fan said: “Since you don’t like showing your body, what prompted this? Covering your body doesn’t change the fact that you are a beautiful girl.”

Commenting, however, an industry watcher who spoke on grounds of anonymity, said: “Okeke is only seeking attention. Maybe she feels she needs to be more popular than she is right now. Forget all the talk about being shy and whatever. Sex sells and she knows that too well; this is just a publicity stunt, a cheap one at that.

Nkechi Blessing Sunday: Why They Said My AMVCA Dress Is Old School
Funke Akindele To Return To “Ex-Lover” Who Brought Her Into The Limelight