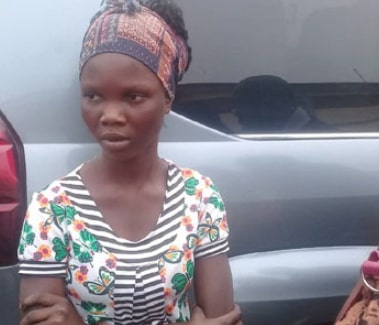 I have been married for three years now and have not been able to have my own child. I love having children around me and it was that love that pushed me to steal my madam’s baby.”

Those were the words of 22-year-old Sulyiat Badmus, arrested by the police in Lagos for child theft.

She told detectives that she stole the toddler at 1, Adeyiga Street, Odogunyan, in Ikorodu where she applied as an apprentice under the child’s mother, Shukurat Opeoluwadu.

Badmus said a native doctor had told her she would never conceive and that led to her being desperate to have a child.

The suspect, a resident of Sabo, Ikorodu said she kidnapped the baby when she noticed a neighbour her mother left her with was distracted.

Parading the suspect yesterday, Police Commissioner Imohimi Edgal said the case of the missing child was reported on September 27, adding that he mandated the anti-kidnapping unit to find the toddler and the suspect.

Edgal said the baby’s mother left her in the care of a neighbor, Oluwakemi Amosun, 50, in order to hawk local herbs.

“Sensing that Amosun was busy outside her room, the suspect sneaked in and stole the baby. She absconded thereafter.

“After directing the anti-kidnapping squad to take charge of the matter, investigation led to the arrest of the suspect at Sabo in Ikorodu.

“The baby was rescued from her and has been reunited with her parents. The suspect has confessed to the crime and on conclusion of investigation, all the people involved in this crime will be prosecuted.”
[Source: The Nation]