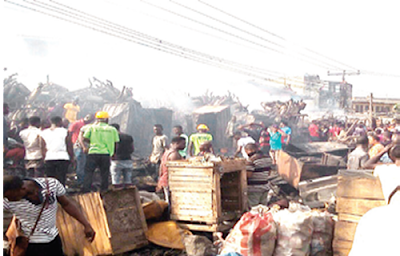 At least 40 shops with multi million naira auto spare parts were today destroyed by some hoodlums at the Ladipo Auto Market in Mushin Lagos.

According to Lagos State Fire Service Director, Fadipe, some hoodlums who fought overnight set fire on the shops over the refusal of the traders to pay them illegal parking fees.

“We got a call at about 1.20 a.m., but we could not move into the complex at Odushina Street, Papa-Ajao, Mushin, scene of the fire due to a fight going on in the area.

“The Divisional Police Officer at Olosan Police Station, Mushin, led us with his patrol vehicles to the scene before we were able to put out the fire at about 4.46 a.m.
“There were no cases of death or injuries recorded from the inferno.
“My men, however, saw some people with blood all over their bodies, which they suspected were injuries from the fight, “ Fadipe said.