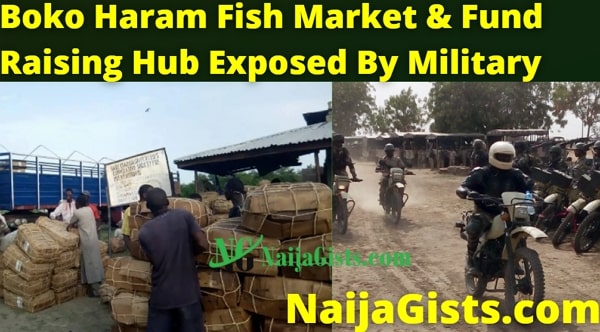 MNJTF, The Multi-National Joint Task Force has uncovered Boko Haram fish market in the fringes of the Lake Chad shores and arrested 30 people who claimed they are fishermen and farmers, according to military sources.

The market was said to have been discovered to be a fund-generating hub for terrorists with which they procure arms and ammunition.

“The troops discovered the fish market during its aggressive long-range patrol at Tamfalla, a popular commercial fishing hub located in the axis of Kukawa local government areas”, one of the sources said.

Counter Insurgency Expert and Security Analyst with vast knowledge in Lake Chad, Zagazola Makama, confirmed the arrest of the terrorists.

Giving further details of the operation, the Chief of Military Public Information Officer, HQ MNJTF N’Djamena, Lt. Col. Kamarudeen Adegoke, said 30 young men, who claimed to be fishermen and farmers, were arrested in the general area of Doron Naira and are being profiled and interrogated to ascertain their culpability or otherwise.

He said Items found in the enclave include packed fish in cartons, fish being prepared, assorted grains, house hold items and a lone motorcycle.

ISWAP had reportedly sustained its campaign of terror through fishing, farming and cattle rearing and other socio-economic activities in the LakeChad.