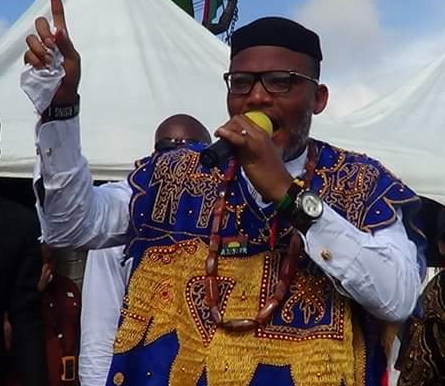 A Northern youth group, Arewa Youth Assembly (AYA), has called for the immediate re-arrest of Kanu.

The group, while protesting in Abuja, yesterday, claimed that the IPOB leader’s unguided utterance and continuous disobedience to court orders was responsible for the quit notice given to the Igbo to leave the North before October 1.

The protesting youths marched from the Unity Fountain, which has become famous as a protest ground, to the National Assembly gate, with the full escort of the police, where they made some of their demands known.

Speaking through their leader, Mohammed Danlami, the group stated that Kanu has continued to violate his bail conditions and all the security agents were watching him.

Danlami, who also dissociated his group from the Northern Youth group that issued the controversial quit notice, also accused the IPOB leader of being responsible for the anti-Igbo song that has gone viral on the social media and other platforms.

He also justified the quit notice on the basis that the IPOB leader has continued to create more confusion in the polity through his various anti-government activities. Danlami and his group said that Nigeria’s unity was being threatened by IPOB’s activities.

They also urged Acting President Yemi Osinbajo to sack the Inspector-General of Police, Ibrahim Idris and the Director General of Department of State Services (DSS) for failing to arrest those who issued the quit notice.

“When our effort proved futile, we went ahead to organise another press conference for the re-arrest of Nnamdi Kanu for violating court order such as he should not hold press conference he should not be in the midst of more than 10 people or organise rallies, among others, which we gave the Federal Government an ultimatum of 10 days in order to halt youth agitations, which the Federal Government refused.

“The problem is that until Nnamdi Kanu is arrested, the youth who gave that quit notice will not rescind their decision. The whole issue revolves around Kanu, because, according to them, the chief Biafra agitator is trying to create a new country, which means that he is undermining the sovereignty of Nigeria,” Danlami stated.

Continue Reading
You may also like...
Related Topics:Arewa, ipob, leader