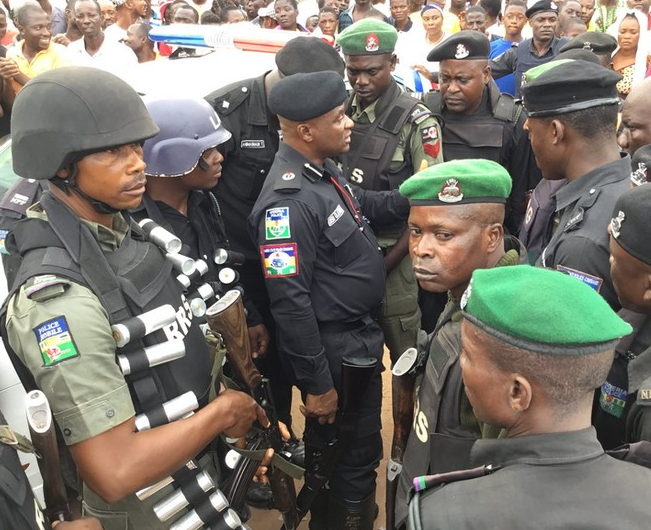 Lagos Police has arrested 5 more suspects in connection with the ritualists’ den uncovered at Obadeyi bus stop, along the Lagos-Abeokuta Expressway.

Among those arrested was a strange woman who attempted to enter the tunnel, where four suspects were smoked out on Tuesday.

The den of ritualists was discovered on Tuesday when a woman’s cries for help attracted passersby. Two suspects were burnt alive by a mob, while two others were arrested by the police and the Army.

Commissioner of Police, Mr. Fatai Owoseni, told Daily Sun that five more suspects had been arrested in connection with the alleged ritualists’ den.

The CP said apart from the two suspects rescued from the angry mob who wanted to lynch them, five more suspects were rescued from the mob and were taken into police custody for interrogation.
Owoseni, who spoke through the image maker of the police, Mr. Olarinde Famous-Cole, said:

“We are still investigating. We are interrogating all the suspects in our custody. Through the suspects, we will be able to verify certain stories we are being told. You should give us time to find out certain things and verify. We shall brief you of our findings, but be rest assured that we shall do the needful.

“The Commissioner of Police has visited the scene and detailed our men to maintain law and order in the place. He has also warned against jungle justice. Hand over suspects to the police and, through profiling, we will be able to discover if the person is innocent or not.”

A senior police officer said out of the six suspects in police net, three of them could be regarded as principal suspects as they were fished out from the tunnel, while three others were arrested outside the tunnel.

“We will find out by tomorrow why they were at the scene at the odd hour that they were picked. I don’t see any responsible person that would be at that place at that odd hour. Definitely, they have questions to answer. They are not in stable mind now; by tomorrow, we will interrogate them properly and we will be able to know who is who. We even rescued a strange woman from the hands of people who wanted to lynch her. The woman is behaving as if she is of unstable mind.

“We are still watching the woman to verify if she is really healthy or pretending.We were told that some loaves of bread, fish, condoms and other items were found on the woman. These are the things that we are trying to verify. Whether she is an agent or not, we will let you know.”

Meanwhile, a witness, who simply gave his name as Joseph, said a woman, suspected to be a lunatic, came to the scene and behaved in a suspicious manner.

Describing what happened, he stated that the woman wanted to enter the tunnel. In the process of being stopped from entering the tunnel, the woman’s handbag fell and two loaves of bread, fish, an exercise book containing names of people and a pack of condoms fell out of the bag.

He said the mob had pounced on the woman, but the timely intervention of security agents saved her from being lynched.

Joseph said before the arrival of the woman, some OPC members entered the tunnel and brought out a television set, cooking pot, generator and some other home appliances.

He alleged that one of the OPC members, who entered the tunnel claimed there was a strongroom there with a strong door.

Meanwhile, a woman, whose shop is located around the spot, said there was always offensive odour around the ritualists’ den. Also, she claimed that fresh bones were sometimes noticed in the area.

DPO of Meiran Police Division, Chief Superintendent of Police Okoi A. Akpama, confirmed that the strange woman was rescued from the mob.

He revealed that the woman was still in their custody as at press time.

When asked for update on the ritualists’ den saga, he said policemen kept vigil at the place till dawn yesterday.

He said following information, some plain cloth policemen with sniffer dogs went to the house of a man who was eventually arrested and is being detained at Area ‘G’ in Ogba.